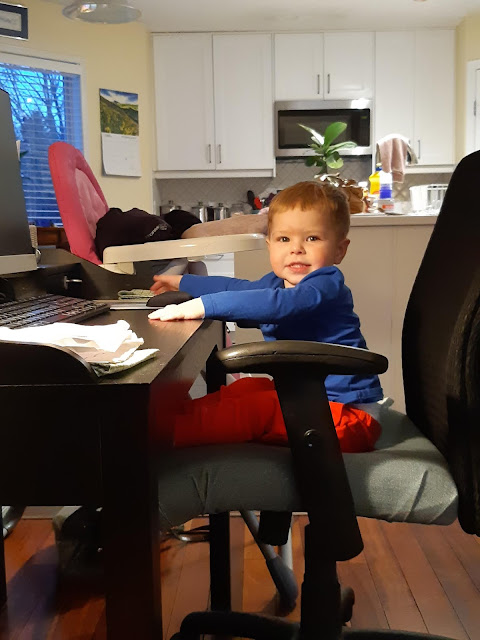 I now have a ghost writer.  He's so pleased with himself that he can reach Nana's computer now.

I was talking to my manager on Monday and she said something about me being an extrovert and I corrected her and said that I am indeed an introvert, but she only sees me at work.  At work, with my patients, I am outgoing and funny.  I joke a lot with my patients but I also have compassion for my patients and I try to meet them where they are on their journey.  I talk to all my patients, try hard to remember their names, I want them to have a good experience in our department.  In real life I am quiet, have a hard time making small talk and tend to keep to myself.  I refill my cup when I'm alone.  I like to walk alone.  I bake alone.  I sew alone.  I  need that time alone to recharge my batteries.

When I was a kid I was painfully shy.  I don't think I'm shy anymore but I still like my alone time and when I thought about that this week I realized part of the reason I feel so drained at the end of the day is me being extroverted at work.  I'm not about to change that because my patients matter but for me understanding how much extroversion takes out of me is a good start.

The little guy has us and the ladies at daycare and between all of us, we provide a lot of predictability for him which little people need.  I don't know what the future holds for any of us but right now it's good enough. 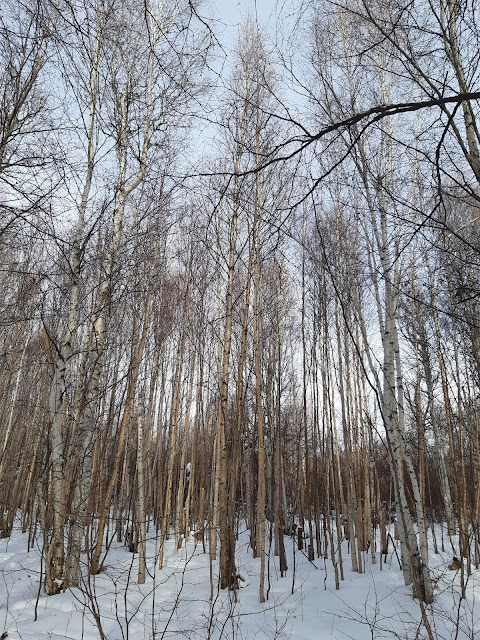 The dogs and I went for a lovely, long walk yesterday morning.  We had a bad wind storm a month ago but the paths have been cleared now.  It was too cold to walk for two weeks so I hadn't been back in awhile. 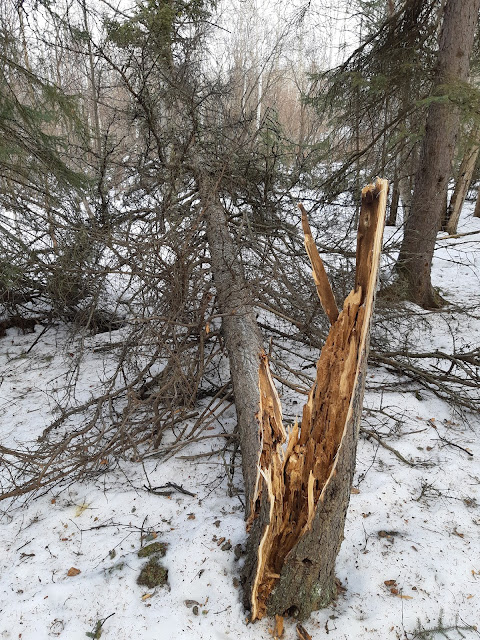 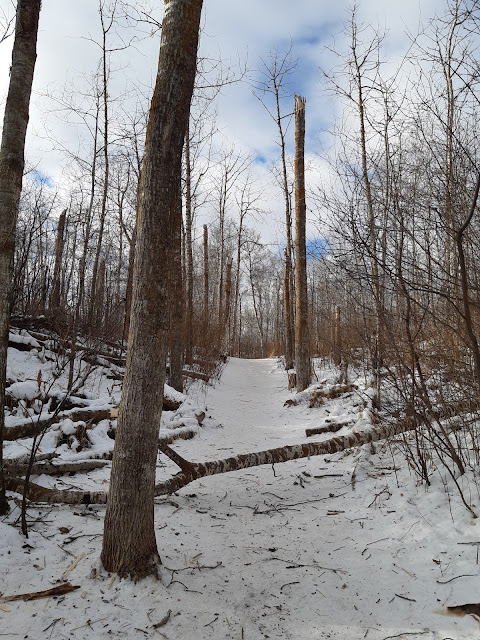 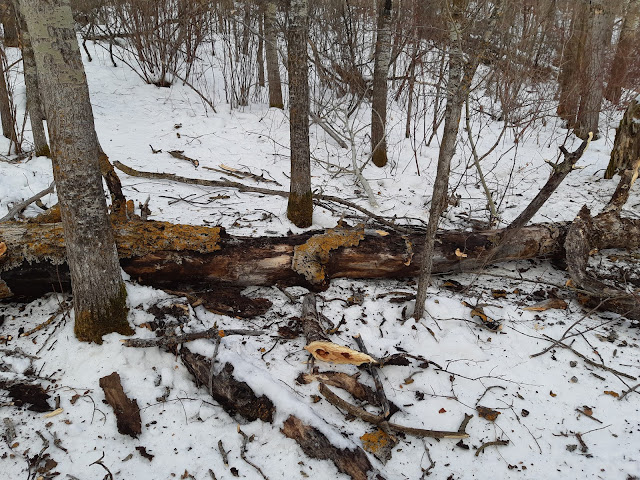 The little guy's crib has been put away in the basement and I bought a second hand chest of drawers and refinished it.  I like how it turned out and now his clothes won't be in piles.

The chest of drawers before.  It was in good shape, just out of style.

After some chalk paint and new handles. 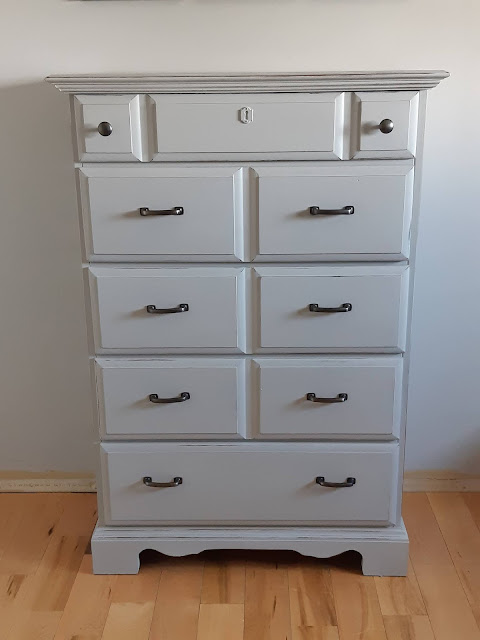 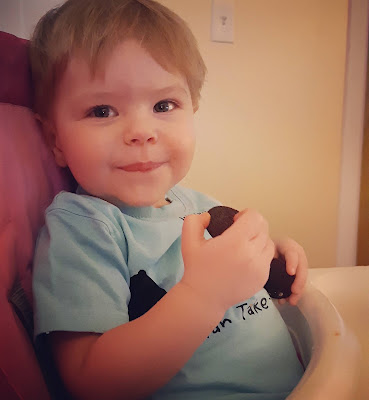 He's going to be with us for the better part of March.  Life continues on.

I talked to my middle daughter last night and that was so nice.  I miss her still, even after ten years of her living on the coast.  She has injured herself again while running so now running is off the table for the rest of her life.  In December she fractured her femur while running and now the other femur is acting up.  She and her boyfriend having been living and working in a six hundred square foot apartment for the past year so they must be a good fit.

We visiting Miss Katie this morning which makes me smile.  The weather is warm.  The birds are flitting about at the feeder and beagle is snoring on the chair beside me.  A good day. 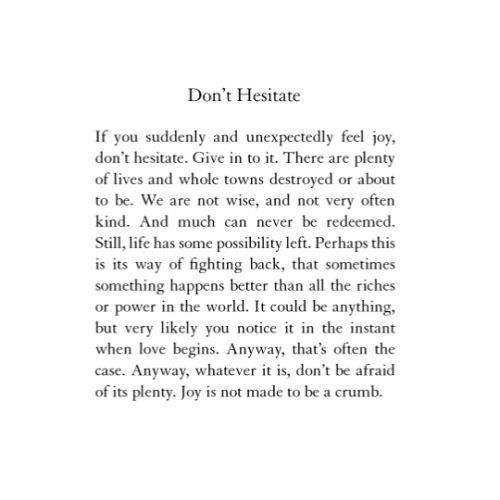 Poems by Mary Oliver, a much wiser woman than myself. 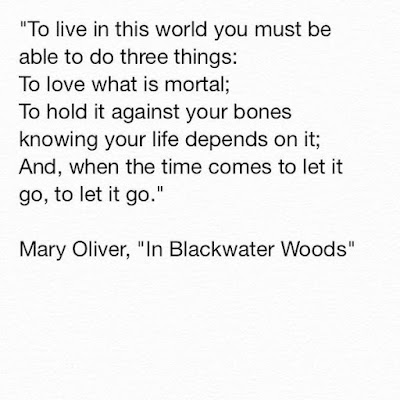 Last week I told a youngish man that he had cancer, that his colonoscopy had shown cancer and that they had sent him upstairs to us for a CT to see if and how much it had spread.  But the doctor didn't tell him that.  I told him what was on the requisition, because he asked and if it was me, I would want to know and it broke my heart.  But we were busy and I had so many more patients to deal with so I left him with a warm blanket and a broken heart and the memory of being told he had cancer in a busy waiting room without his wife to hold his hand.  To live in this world is to have your heart broken over and over again.

On Tuesday I joked with a patient before we put a central line in him for his treatment.  The radiologist literally glared at me and I felt afraid like when I was a small child.  This doc is a bully who has been left unchecked for years.  After the procedure I asked the patient if I had offended him by my joke and he told me no, that he had appreciated the humor.

I asked my young friend if she would take care of me when I was an old woman and she said, "You already are an old woman!"  and laughed.  But she did agree to care for me when I'm eighty.  She is one of my adopted daughters and it is her daughter that I'm making a quilt for right now.

We're picking our grandson up from daycare today and keeping him until Sunday.  Gracie seems to have gotten over her paranoia.  We haven't seem him since last Saturday which was actually a nice break, even though we miss him.

I picked up an old chest of drawers for his room and I'm in the process of painting it with chalk paint.  I'm painting it a lovely gray.  His crib will be put away for good this weekend as he doesn't stay in it at all.  He is a ninja now.  He's figured out how to push chairs around so that he can climb up on them and reach a whole new level of previously off limits things such as light switches and remote controls.

The weather is warming here finally after two weeks and I'll be able to take the dogs for a walk today which I'm looking forward too.  The sun is shining and there are birds at the feeders outside the window.

my patients who remind daily what's really important in life

my hubby who loves me as I am

a day off today 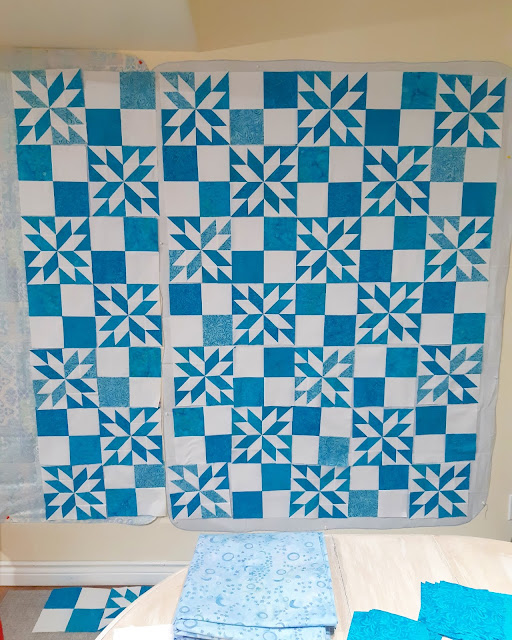 and quilting, the fabric at the bottom of the photo will be the backing of this quilting, moons and stars 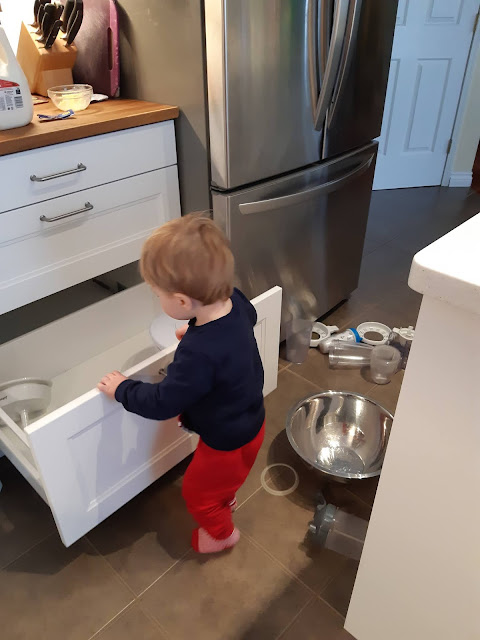 My grandson is fascinated with this drawer.  It's filled with odds and sods and a huge metal bowl.  We took him to visit his father yesterday.  My son ignored his own son for a fair bit of the visit and three times walked away while the little guy was up on a stool that was to high for him to get off of without falling;  three times I grabbed the little guy.  My son has a step daughter now who is seven I think.  She's a sweet little girl who likes playing with the little guy, so those two had a good time.

Gracie is not doing well again, or still.  She accused me of going into her house and stealing dirty laundry.  Why the fuck would I steal dirty laundry?  She wants boundaries which is fine, I don't have a problem with that but it's based on something that never happened.  She gave me the dirty clothes to put on the little guy last Tuesday when he had to go to daycare and she had to go to court but she overslept.

It's a long story but no, I did not steal dirty laundry from her.  I wonder if she is going to end up in the pysch unit and now she's paranoid of us.  I did talk to her mother who will keep an eye on them as well.

On the up side, we get to visit with Miss Katie today.  We got the word yesterday and we get to take her out which will be wonderful.  I miss her and haven't seen her since I took her to the dentist in early January.  That girl gives good hugs.

It's been bitterly cold here so we haven't been out much and I've made a lot of progress on the quilt which is satisfying.  It will be ready to sew together today or tomorrow.

I haven't lost my freaking mind which is amazing.  I'm remembering to breathe through my nose, trying to let things go, although I was mad as hell the other night when Gracie accused me of stealing her laundry.  I let that go too. 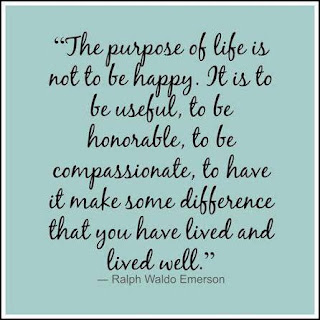 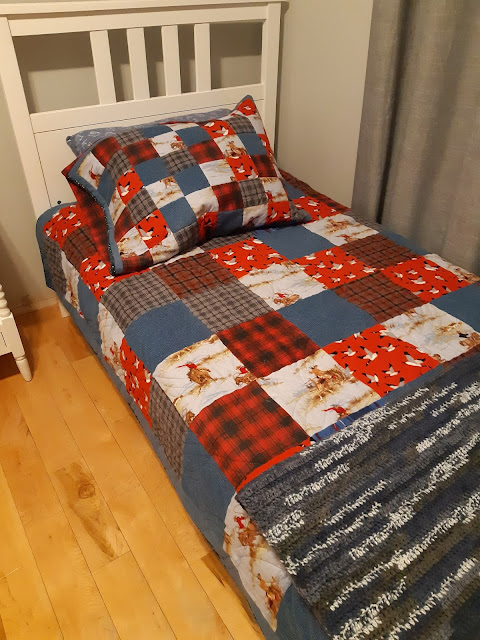 Very little has changed around here.  I finished my grandson's quilt just in time.  He won't stay in his crib anymore.  He's a freaking ninja.  It's been a tough week here for us and him, trying to get him to sleep.  I know it will pass but I don't do well without a good sleep.
I've started a new quilt for the daughter of a friend of mine.  Celina will be six in June and she loves blue.  I wanted to do a wave quilt but it was too complicated so I'm making this one instead.  Lots of cutting and sewing and pressing but I enjoy it and get to listen to CBC while I work. 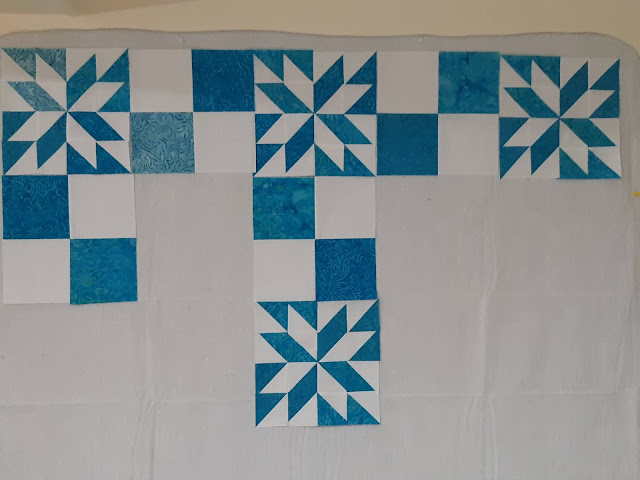 I'm still eating a soft diet, waiting for my TMJ to heal.  I've started baking this, amish baked oatmeal.  I keep adding spices and it's quite tasty with no chewing required. 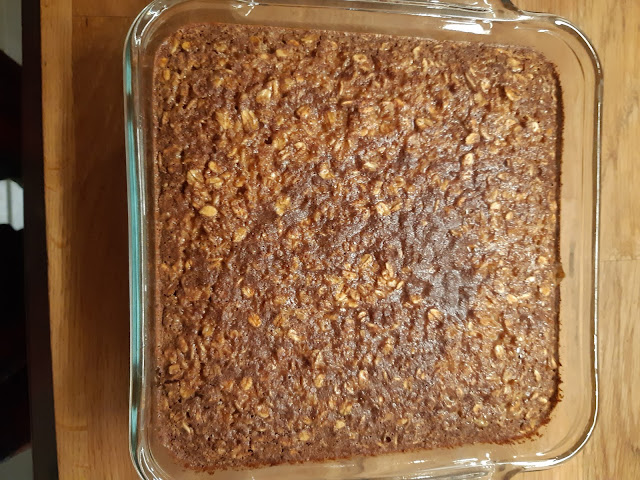 Life continues on.  Work is work.  I'm minding my own business and staying calmer.  When the one coworker who always pushes my buttons starts doing irritating shit, I walk away and stay out of it.  Much less stressful for me but all of us right now are feeling stressed with the pandemic nearing it's year mark.

We've been in and out of lockdown a couple of times now and it doesn't seem to make any difference to our lives.  We still go to work, still need groceries and still don't really go out.  We're not overly sociable, two introverts, so staying home isn't all that difficult.

Shit with my son continues which is the hardest to deal with.  He is a sociopath which means he never stops manipulating or lying, never stops trying to get what he wants, ever.  He doesn't play by any rules except his own.  He ignores court orders, ignores the police, ignores the rules of a civil society and that's not going to change.  If it wasn't for my grandson I would have nothing to do with my son ever again.

Gracie had to leave her job at the shelter because she was being targeted by gang members who were trying to take over the shelter, running drugs and recruiting prostitutes.  She reported them, called the police and they started following her when she left work.  She's back to work at the transition house which is safer but less work.

I'm trying to take care of myself, breathing through my nose, paying attention to my breathe, it actually helps.  Trying to sleep better.  Trying to eat better.  I still wobble a little but only a little which feels pretty good.  We're in the middle of a pandemic and I feel okay.  That's a huge win for me.  I'm coping. 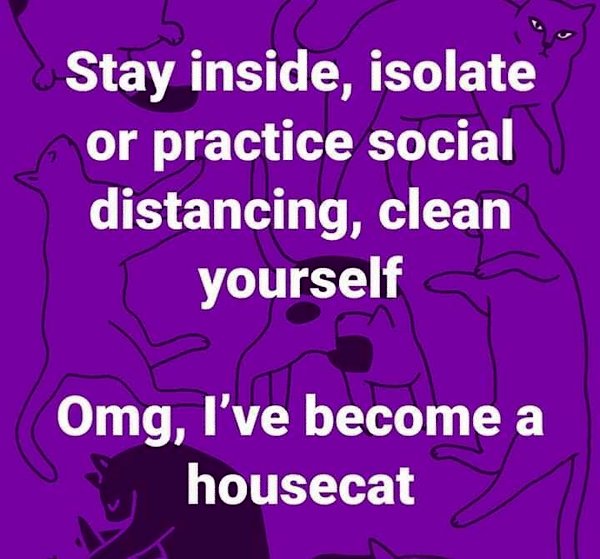