Mum died a year ago today.  I was too busy today at work to mourn her passing.  When I got home I sat in the bath with a glass of wine and tried to have a conversation with my mum.  I tried and it didn't work, I need to write it out and so here I sit.

I miss you mum.  This past year was hard, a year of firsts.  My first Mother's Day without you, my first spring, my first birthday and lastly, my first Christmas ever without you.  It's better than it was a year ago.  I don't cry all the time.  I don't cry every night when I got to bed.  I don't hang up angry and frustrated with people on the phone.  I don't want to rip anyone's head off.

In fact most days are good days.  I can remember the good things that we had, supper on Sunday, walks in the river valley, knitting, having a cup of tea and of course jokes and laughter.  You taught me without realizing it how to laugh, how to see the funny side of things and even how to tell jokes.  You were my first audience.  The rubber chicken that somebody gave you one Christmas still sits on the shelf beside my bed.  That chicken reminds me of your sense of humor every time I see it.

You were frightened of dying too I know, scared of a vengeful god.  I told you that god doesn't work that way and I believe that.  I don't believe any divine being would punish people for eternity.  I believe that god, the divine, is about love, not about hate and retribution.

When I remember you, it's not how you were for that last year before you died, it's the you from a few years ago.  The woman I went to England with, who got stuck trying to climb over Paul McCartney's fence, who laughed so much that you couldn't get off the fence without help.  The woman I walked with down river valleys both here in in England.  The woman who taught me how to garden and love birds, although you never convinced me to love roses.

But as I sat in the tub, I realized that I also mourn the mother I never had and maybe that's a normal part of grief.  I never went to you asking for advice, nor did I want to share my troubles with you.  Partly because you told the rest of the family and partly because I didn't respect how you dealt with conflict, all passive aggressive.  Of course I do both of these things and of course I hate that I do them.

You were a great one to make a compliment sound like a criticism.  I was always too loud, too aggressive, too much for you.  Even as a middle aged woman, you would try to dampen down my spirits.  I'm not sure why but you did.  Actually that's not true, I know why you did it, you were always concerned with what others thought.  I wish I'd had a mum who could have accepted me just as I am.  I'm guessing you would have wanted the same from your mum, or mummy as you called her.  I understand with my head that you could not give me what you had never been given yourself, but inside of me there is still a young girl who wants desperately to be accepted and loved.

You were a good mother.  You taught me that family is first.  You weren't perfect and maybe that's the greatest gift you gave me, the knowledge that we can love people despite their imperfections. 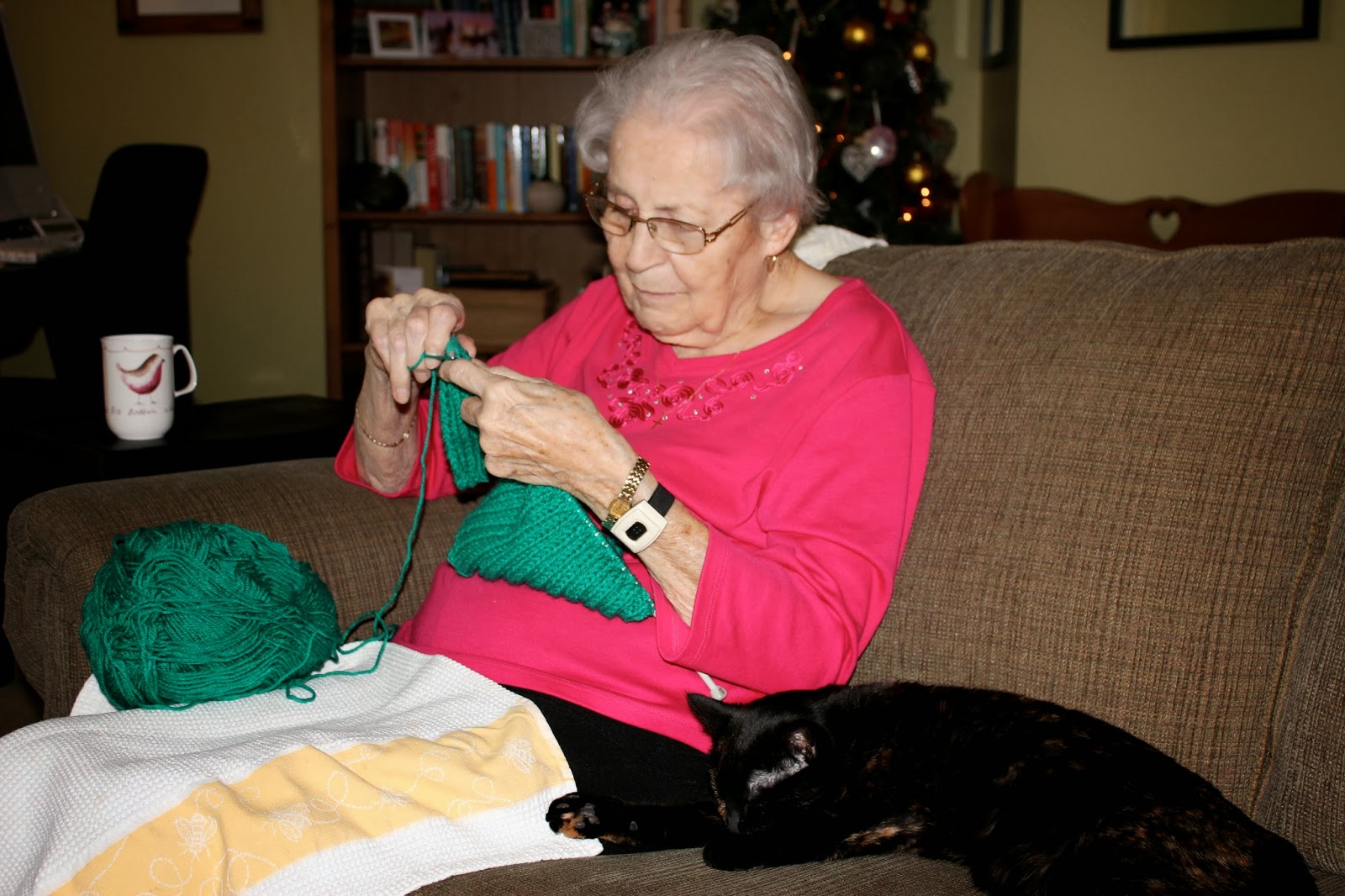 Me and my mum, a year and a half ago.  The big guy and I took her for a weiner roast, her first, down in the river valley.  It was a wonderful day. 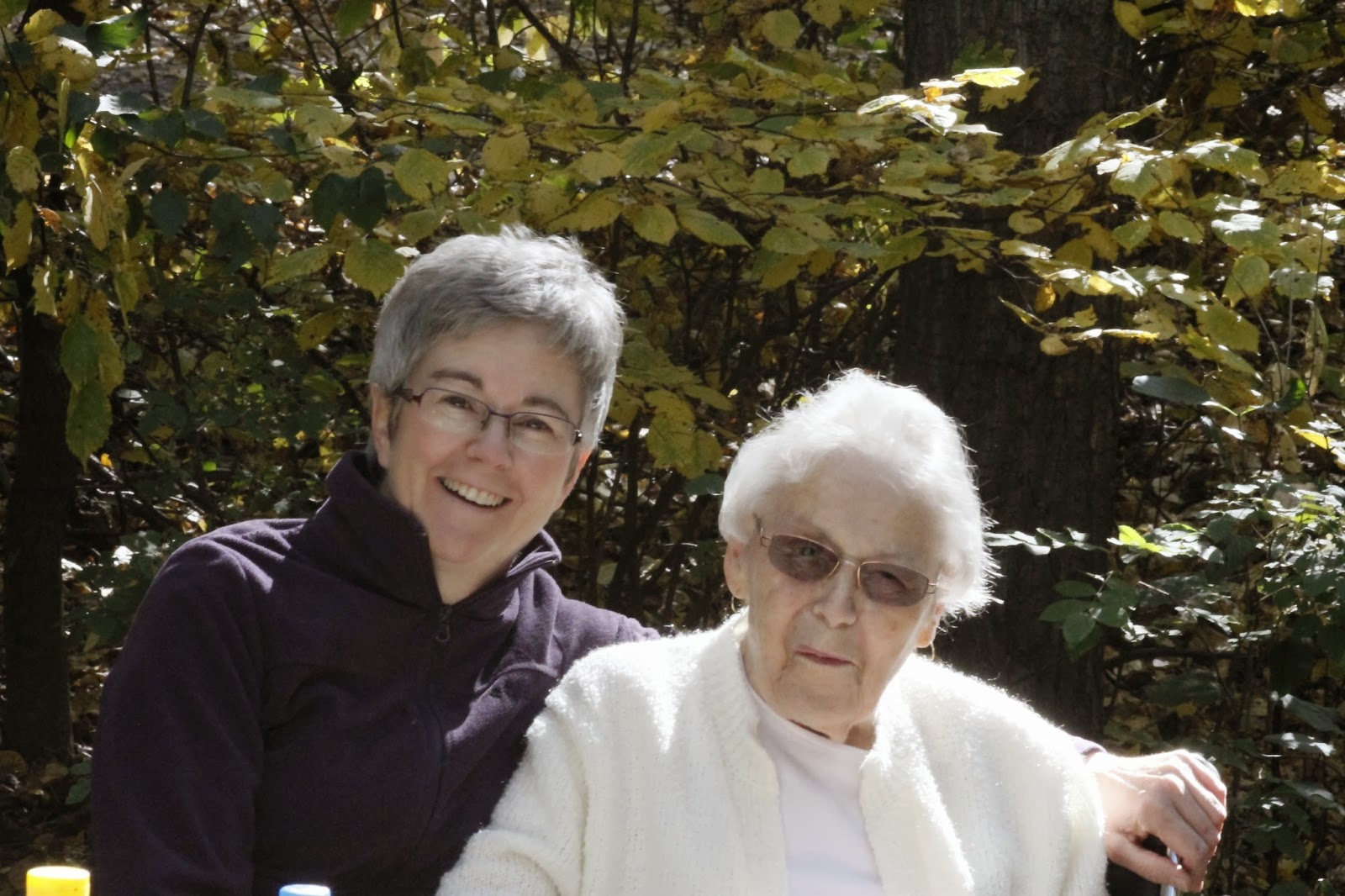 She got to feed the chickadees out of her hand. 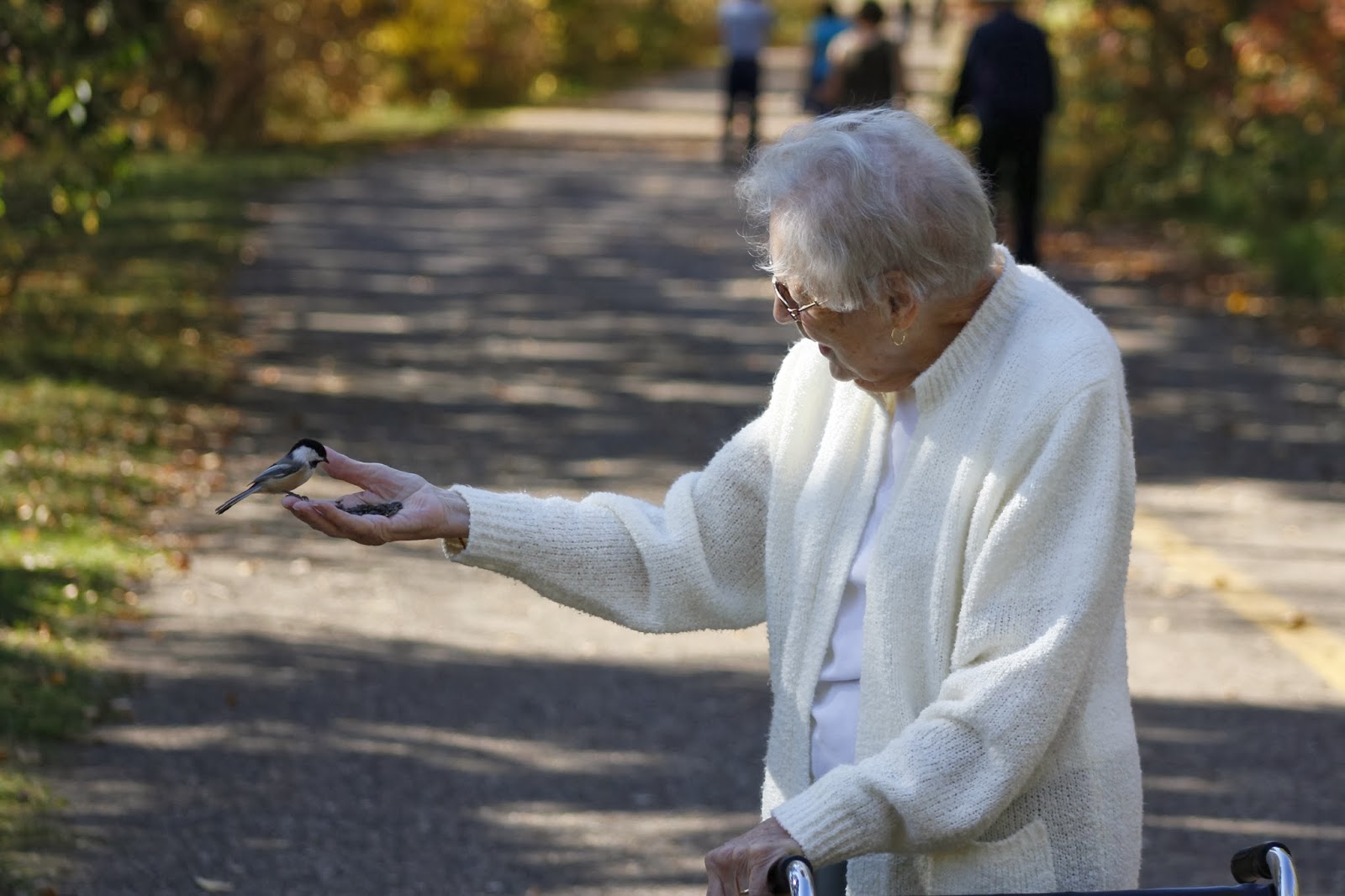 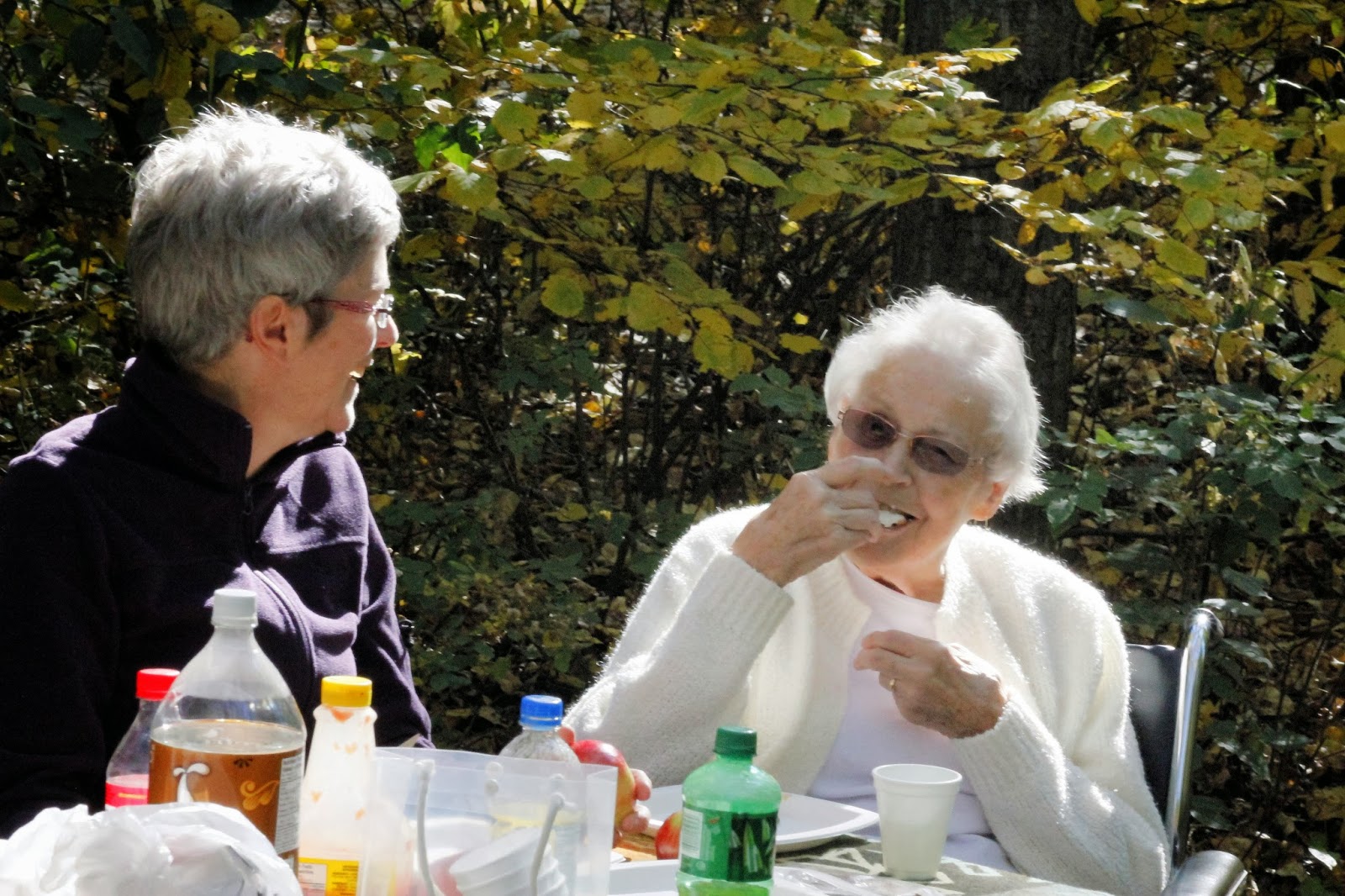 It will be a year next week since she died.  I miss her still, especially her laugh.
at February 19, 2014 2 comments: 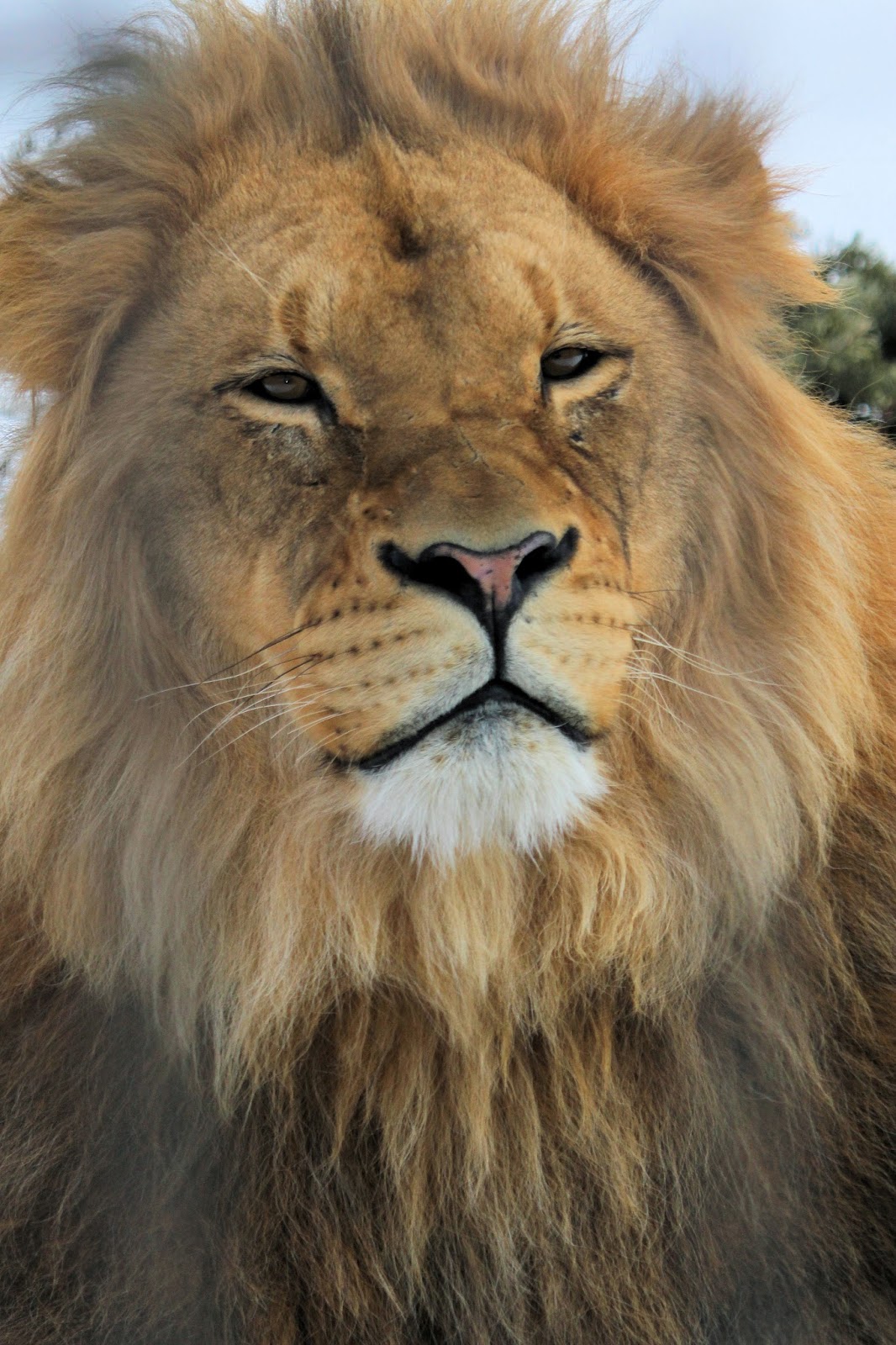 The big guy and I went to the zoo this weekend down in Calgary. He took this photo.  It reminds me of him.
at February 17, 2014 5 comments: 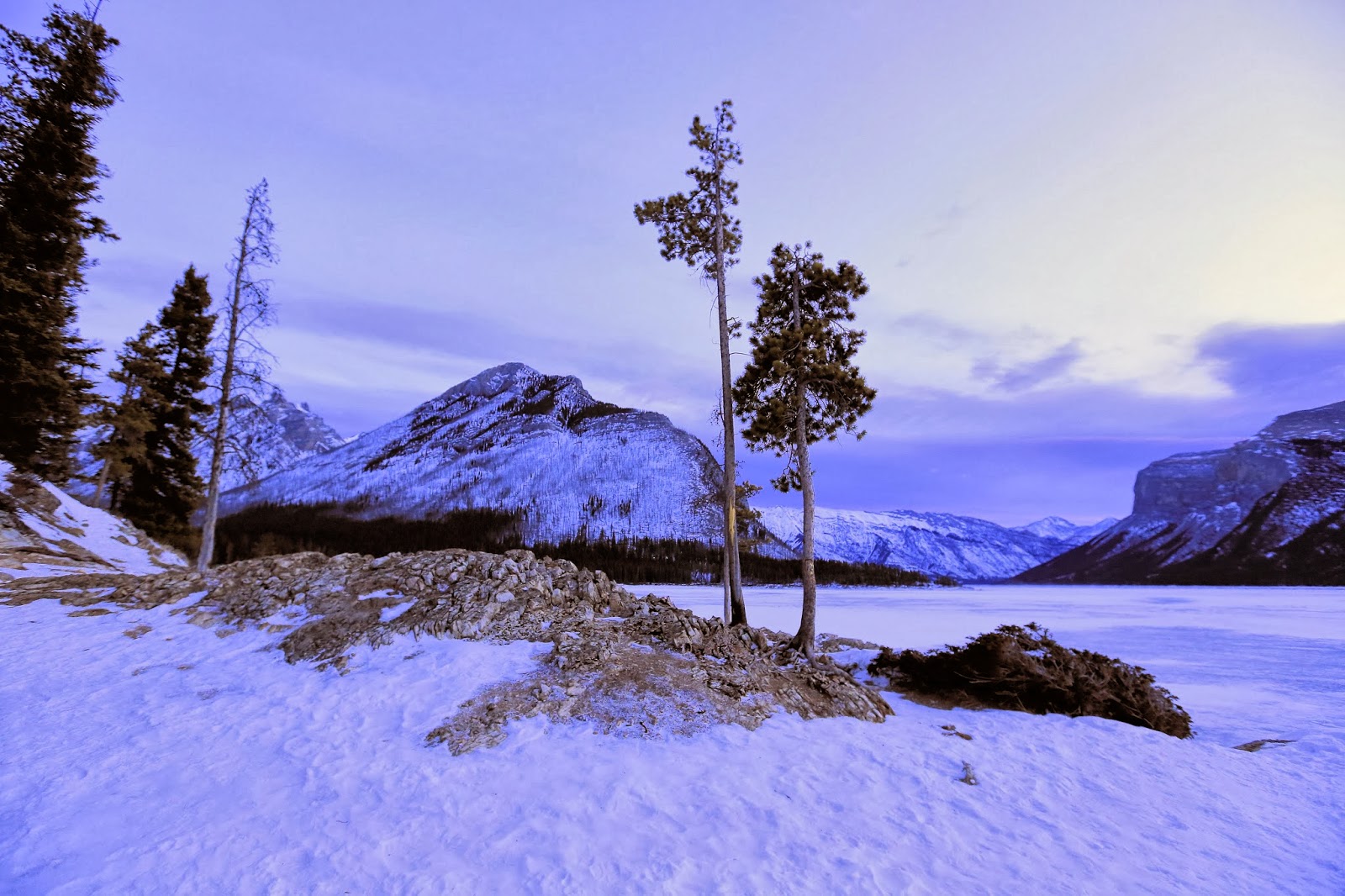 Last week a staff member at Katie's house was fired for emotional abuse directed at Katie's roommate Amber and indirectly at Katie.  When I got the email telling me about this I felt sick to my stomach and then relived.  Sick to my stomach that anybody would abuse vulnerable women like Katie and Amber and then relieved that Katie was only indirectly affected, which probably doesn't win me any person of the year awards.

Amber is mostly a gentle soul except for once a month when she goes off the rails and tries to put her head through a window, or a wall, or flood the place.  The police and EMS are often involved. Katie is also a gentle soul who lives with a lot of anxiety which leaks out of her fingertips.  She tends to pull hair, pinch, slap, scratch, mostly other people but she also likes to have a go at herself as well.  When things are really bad, she bangs her head against the wall or the floor causing bruises or in some cases, open wounds.  Katie doesn't sound so bad, a little pinching or hair pulling but she can take me down to the ground if I'm not careful and she has.

Both of these young women require constant monitoring so that they don't hurt themselves or others.  Amber can talk but mostly just repeats back what you say to her.  Katie can't speak at all but does have some limited sign language.  They are extremely vulnerable and I trust the agency who cares for them.  When the abuse came to light, the staff was immediately fired.

Combined with this incident was a recent post on Elizabeth's blog in which she wrote about what Sophie knows, or doesn't know.  I don't really know what Katie knows or doesn't know either.  I can tell how she feels by her body language and the expressions on her face but what she understands is often a mystery to me.  I can tell you though that Katie is far more perceptive than most people give her credit for.  The post and the firing got me to thinking about Katie and about all disabled people and about why they matter.

Why My Daughter Matters

I have three children, Katie is my youngest child.  Katie is severely disabled, or handicapped or delayed or whatever the politically correct phrase du jour is.  She is twenty-one years old and functions at the level of about a two or three year old child.

My daughter doesn't work, doesn't pay taxes, doesn't read or write and doesn't talk.  She won't marry or have children.  She won't go to University or become a scientist.  She won't develop a cure for anything.  She won't write poetry or prose for that matter.  She doesn't shop, doesn't consume, except for the basics.  She doesn't own a car or drive.  She wields no power.  By all accounts she is an utter failure in our society.

"A nation's greatness is measured by how it treats its weakest members." ~ Mahatma Ghandi

My daughter matters because she is here and because she is a human being.  Katie allows  me, allows all of us, to be better people than we might otherwise be.  She allows us to stop and be kind to someone without any expectation of repayment.  She shows us that different is not worse, it's just different.  Her laugh, her smile, show us that life can be enjoyed without all of things that we think we must have.

She reminds us that life is not about the things but about the people in our life.  She couldn't care less what you're wearing, or rather, who you're wearing.  She doesn't judge you by what you look like, she wants to know how you'll treat her.  She is cautious.  I believe that a part of her understands how vulnerable she is and she is careful.  If you are gentle with Katie, patient, kind, you will reap the rewards of her smiles and her laughter.  To hear Katie laugh, to see her smile, trust me, is truly a gift.

To have Katie in my life has been a gift, a hard gift it is true, but a gift.  I am a better person for having known her.  I am more compassionate, kinder, more patient (which is hard to believe because I am not the most patient person) and stronger.  When you walk through a mall with Katie, people know her by name, even though she can't talk.  They remember her smile, her outstretched hand waiting for a handshake.  Katie makes people's lives better because she is here, not because of anything else than who she is.  She matters. 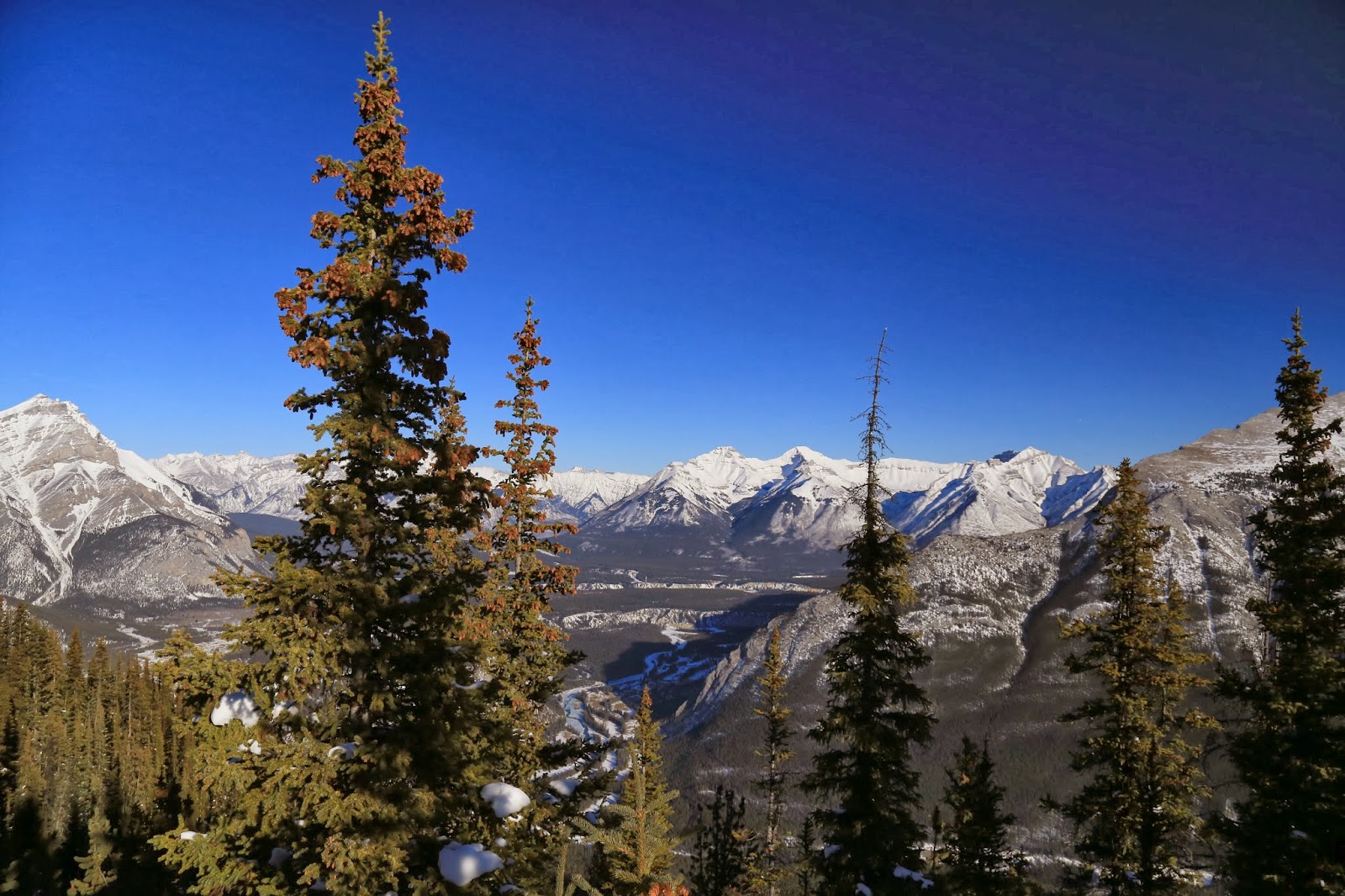 This is a view from Sulphur Mountain;  Banff lies in the valley that is mostly obscured by the tall tree on the left in the photo.

The caregiver who cares for Katie full time.  He is gentle, kind and patient.
Katie has an appointment for her dental care, she requires a general anesthetic.
She can also get the mole, that continues to grow and change, removed under anesthetic.
Friends.
Friends who hug.
Friends who listen.
Sunshine.  The days are getting noticeably longer.
A fire in the fireplace because it's cold outside.
A cat curled up in front of the fireplace.
Lunch with my son last weekend.
The oncology course I'm taking right now.
I figured out how to get a photo on my blog with my new PC.  I still miss my Mac.
My health.  I care for people every single day who don't have their health.
My friend's radiation treatment is finished.
Hugs from the big guy.