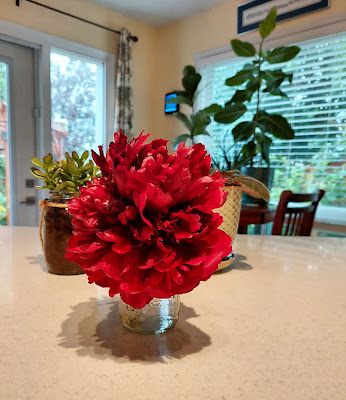 The weather here remains cool and damp.  Last summer I enlarged my front flower bed and planted a peony.  This flower was the only bloom on the plant this year and when I got home yesterday it was handing quite low due to the rain, so I cut it and like Ms. Moon, stuck it a jar of water and admired it in the house.
My brother in law has gone home.  His last day here was Sunday and I phoned my mother in law to let her know that J would be visiting his father from 10-2pm.  He doesn't want to see his mom and his sister said she didn't want to see him.  It was his last visit with his father, probably the last time he will see his father, a father he hasn't seen in almost thirty years.
My sister in law showed up there about forty-five minutes after he got there.  I've learned a lot about her this past visit.  She supplied her thirteen year old brother with alcohol, a lot of alcohol, enough alcohol to make him puke.  She did this for him until he was old enough to buy his own alcohol.  WTF!
My brother in law texted me when his sister showed up at the hospital and he drove back to Edmonton in a rage.  All he wanted was to visit with his father and that was not allowed.  His visits were interupted by his mother and another sister as well.
My brother in law is a lovely man who reminds me of a lost boy.  He swears a lot and gets mad a lot and his emotions leak from him, especially the hurt and the pain.  Him and his brother, the big guy, are a lot alike, two lost boys who have been treated horribly by their family.  It's heartbreaking.
It wasn't all bad though.  I got to meet Aunt and her husband.  Aunt is my mother in law's sister, and another person my mother in law won't speak to. Aunt played a large role in the family; she was a safe place for her sister's children and she's important to my brother in law.
Families are fucked up and not just my own family apparently:) 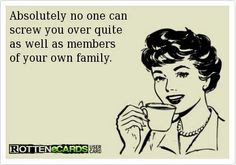