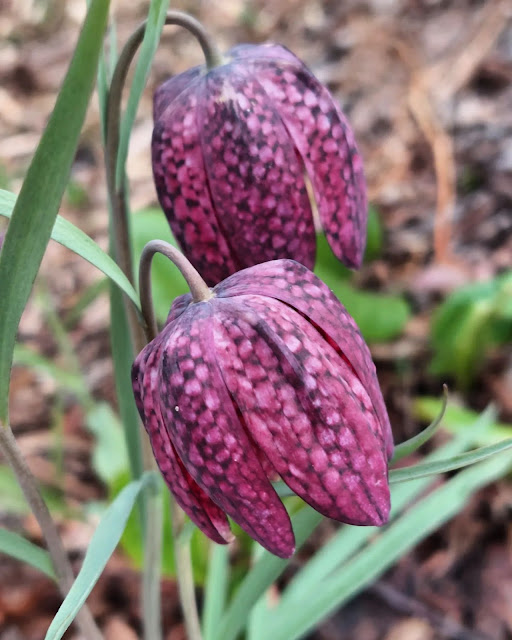 My fritillaria has come up.  I love these flowers because they're beautiful, delicate looking and tough, all at the same time.  They don't last long but the wait is always worth it.
We had Jack all weekend and the poor guy was sick.  He vomited on Thursday night and then had diarrhea on Friday, Saturday and Sunday.  He's also got a congested cough and is just off.  When we took him back home to Gracie, she was pissy, as usual.  Where were his new clothes?  Still in the laundry.  She never asked any questions about him.  She did say that he got sick from the daycare we take him to, the one she chose two years ago.  I pointed out that he was sick when we picked him up from her new daycare and she said, "Whatever!" and walked away.
I'm trying to accept that she will never change but it's hard because I kind of want to punch her in the throat.  My grandson deserves a mom who cares about him as a human being, not as a doll for her to play with.  She also dyed his hair red because, "He asked me to."  Because three year olds want their hair dyed.  Fuck!
Deep breath. 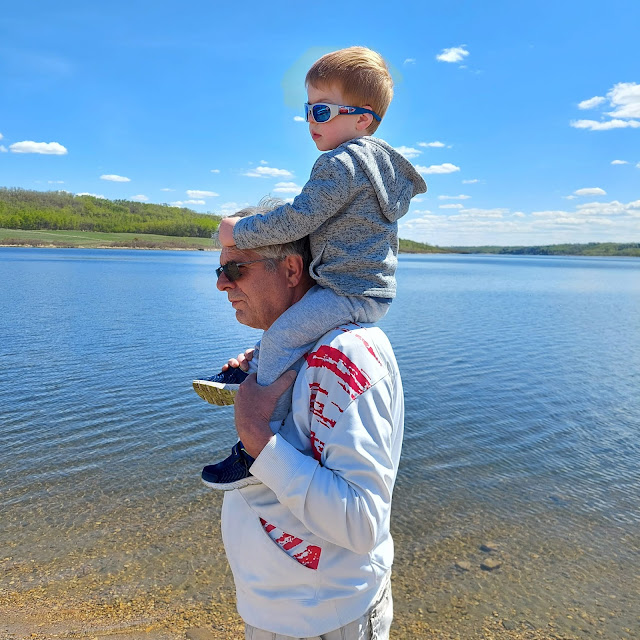 Jack and the big guy at Coal Lake on the way home from Wetaskiwin on Saturday.
My father in law remains in hospital but has improved.  Each urinary tract infection knocks him down but he continues to get back up.  He is slowly sliding downhill though.  He also feels abandoned by his wife and he slips back and forth in time.  He told us last week that he's tired of working and wants to retire.  It's bullshit he said, this working.  We encouraged him to retire.  He was also complaining of having no money so we slipped a $20 into his pocket which made him happy.
He also said he wanted to see his other son so I tracked him down and called him.  My husband's brother visited his dad yesterday for the first time in almost twenty years.  Then he came over to visit us.  My brother in law was very stressed and nervous energy was shooting off of him.  I have a hard time with the energy of others, it seems to wash over me and capture me in it's wake.  Maybe that's why I don't spend a lot of my off time around people.
That being said, on Friday, I visited my girlfriend after my podistrist appointment.  My girlfriend and I had a lunch of ham and cheese croissants we we drove out into the country to visit our favorite greenhouse.  It's the same greenhouse we visited a few weeks ago but it was busier and there were more plants.  Just walking into a greenhouse makes my shoulders relax and I breathe deeper.  I feel my whole body relax.
Work on the rental house has begun finally after repeated calls and emails to the insurance broker and contractor.  Apparently I can be irritating enough to get things done.
Today is a beautiful, sunny day.  I worked in the garden and got my tomatoes and bedding plants planted.  I even had time to tidy up the garden bed out front.  I only lost two perennials last winter, which isn't bad.  The photo below is one of the tulips up in my front bed. 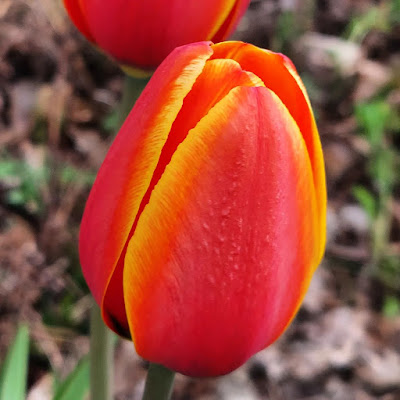