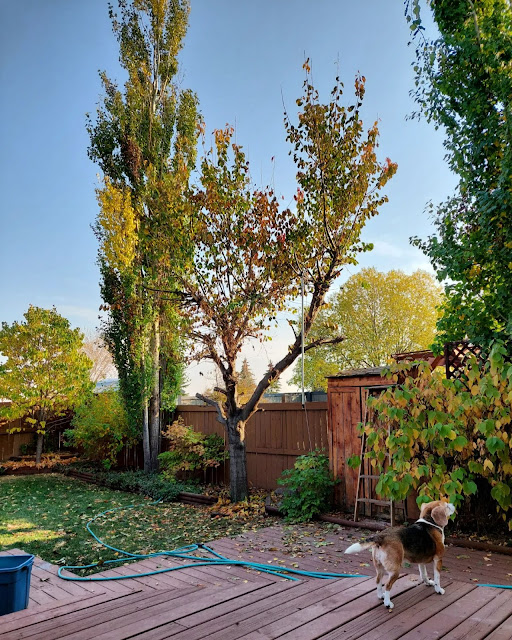 We're in the process of cutting down our Mayday tree.  It has black knot fungus which looks like dogshit on a stick.  It's fatal to the tree and is very contagious to other trees of the genus Prunus, like chokecherry trees which we have in our yard as well.

We cut some branches down and then I burn them because they can't go to the garbage dump, the spores are too contagious.  We've been having a few fires which Jack has enjoyed.  He's surprisingly careful around the fire and helps drag the branches to the fire pit and helps me cut them up with loppers.  I have explained to him that the loppers are sharp and must be kept pointed downwards and he's careful with them.  I also keep a close eye on him.

Two nights ago we sat in the backyard, staring at the fire as the sky got dark.  It was lovely.  It also makes me think about the fact that we have developed computers and robots, have travelled to the moon and still humans like to sit around a fire.  We had a few marshmallows and Jack cuddled up in his poppa's arms, enjoying the closeness.  The other day Jack asked his poppa, "You be my dad?".

He's finally settling in and slept well last night.  A couple of nights ago he was up in the middle of the night, wandering up and down stairs, crying and screaming.  He wanted milk, he didn't want milk.  He was wet but didn't want me to change his diaper.  He was beside himself and kept getting more and more upset.  Finally, I snapped at him, "That's enough!", which upset him even more.  At this point poppa stepped in and settled Jack back in bed.

The next morning I asked him how he was and he said, "You yell at me last night." and then gave me stink eye.  Note to self, keep calm, don't yell.  Last night it was just me and him as my hubby drove to Wetaskiwin to visit his dad who is still in hospital.  Jack and I got along fine and it seems I am forgiven.  We went to the park after supper and when the sun set, we walked home chatting.

The other day when I was driving someplace with him I said, "I could kick myself."  He wanted to know why I would kick myself.  I explained that it meant I was mad at myself.

I've cut my hair short and I had bedhead the other morning.  Jack looked at me and said, "Why your hair look like dat?".

He is endlessly curious.

Fall has been beautiful this year and everyday I think this will be the last warm day.  Today really will be.  It's forecast to get cold over the next week.  I've been spending as much time in the garden as I can because it's a long winter.