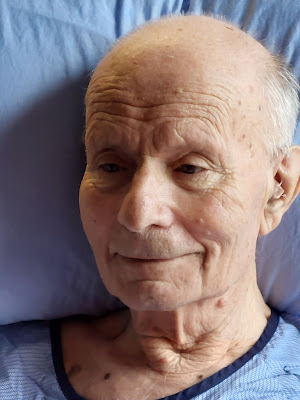 Last week was a shit week but my father in law has recovered from his bout of pneumonia.  A week ago Sunday, everyone gathered around his hospital bed to say their goodbyes and on Monday he woke up and was hungry.  He's much better, although still very weak.  I told him that he was at death's door and the doctor was trying to pull him though;  he smiled.  Yesterday when we visited him, I brought him some of the lemon dessert I had made for Easter supper and he ate it, smiling all the while.
I'm struggling with depression again/still.  I hate depression with a burning passion.  It sucks all the color out of life and makes me cry daily.  Worrying about Jack doesn't help either.  When we drop off Jack with his mother now, I find that I am pulling up walls around me to protect myself.  I imagine Jack can feel that too and I wonder if he thinks it's because of him.  I hope not.  Gracie is pleasantly unpleasant when we drop Jack off.  He cries when we tell him he has to go visit his mama and then becomes resigned.  It breaks my heart, watching a three year old become resigned.
I've decided we will not host a Ukrainian refugee family after all.  To be honest, and I need to be honest with myself, I don't have the emtional capacity to deal with someone else's grief right now.  Maybe in the future, but not now.  We thought a family was coming to us but they went to Saskatoon instead.  I've also noticed trolls popping up on the Facebook groups that I visit for refugees saying awful things and I can't handle that right now either.  I've left those groups.
On the plus side, I talked to my middle daughter for awhile yesterday and she told me about the last two years of her health problems and how her diagnosis came about.  She didn't tell anyone except her partner.  I couldn't have done that.  I tend to suffer out loud.  Right now she's doing well and I'm thankful for that.
I'm still off work for at least two more weeks.  My sore foot isn't helping my mood.  I have a cane that I'm using, mostly just at night now when I get up.  The pain is subsiding and I see the podiatrist again this week.  One of the medications she ordered for the pain gave me insomnia and messed with my mood, which wasn't helpful at all.  I've stopped taking that and hopefully things will right themselves soon.
We also had a short visit with grandson #2, Charlie,for a bit on Friday.  He's a sweet little guy. 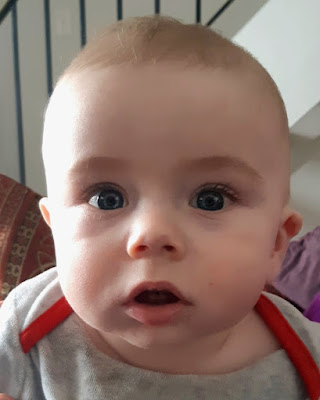 The sun is shining which helps me too.  I saw my first robin last week which means it's truly spring here.  My tomatoes are doing well.  The yard is dry enough for Jack to play outside now, which he loves.  It's been a long winter, for everyone.
at April 18, 2022