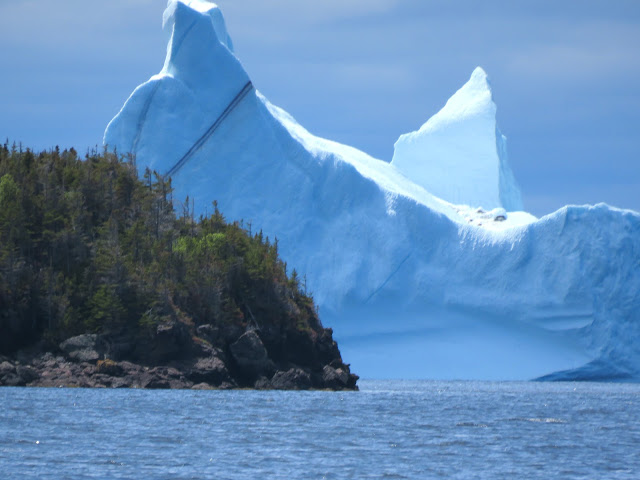 This photo was taken three years ago on our trip to Newfoundland.  As they say, that's only the tip of the iceberg.
I'm feeling weepy today.  Yesterday was a day from hell.  Our first biopsy patient coded on the table, during her biopsy.  Her heart never did stop, thankfully, but she was unresponsive and her oxygen levels dropped enough that we had to bag her.  My heart rate always goes sky high during a code and it takes me awhile to recover.  The patient's husband was distraught, rightfully so.  An ambulance was called, our clinic/hospital doesn't have an emergency or ICU, so patients get sent over the University Hospital.  The patient was bleeding from her mouth and nose so I made EMS stop while I wiped the blood off her face as they were going to walk right past the husband.  Blood upsets people, even nurses.  The patient made it over to the University and woke up.  Nobody seems quite sure what happened but it shook us all, especially the doc. Stroke maybe?  We'll see.
Another patient fainted and lots of tough, tough IVs that I had to start as I'm the expert, or at least the oldest.  Mentally draining, and spending an hour starting an IV is tiring.  Lots of patients, lots of chaos.  At the end of the day I locked my purse and keys in my locker so we had to wait for the maintenance guys to come and use bolt cutters to remove my lock.
Then Jack came back to our place last night with soaking wet feet, boots and pants.  He looked exhausted.  Last night he slept for 12.5 hours.
My father in law is still in hospital and I'm still trying to get the rental house fixed up.  Everytime one job is done, another twelve pop up.  The drywall is being repaired today and tomorrow and now the contractor says we should pull the toilet and replace the seal because he thinks there may be a slow leak as well, which is not a huge job but it is another job.  And all of the fittings under all of the sinks have leaked over the the past few years because apparently that type of fitting was no good, at least that's what the realtor said, so there's that to deal with.  And the backyard is filled with Gracie's junk still.
I'm feeling overwhelmed right now.  And Gracie wants to start taking Jack overnight again which scares the shit out of me.  Gracie has applied for jobs and wants to change his daycare and that scares me too because she has never managed to hold a job and take care of Jack by herself, or without having a core meltdown.  And writing this makes me want to cry again.
And there's dog poop all over the back yard that needs to be picked up.  Everything is too much today.
A sad update, the patient did not survive.
at March 31, 2022