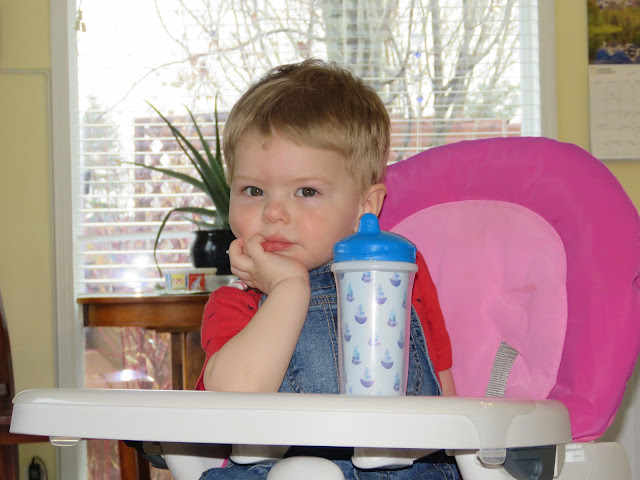 It's the little guy's birthday today.  Two years ago he made his entrance.  He spent the night with us last night as Gracie was too stressed out to deal with things.  By deal, she means clean her house because her family is coming today to see the little guy.  She also bought him a big boy bed which she's quite proud of;  it looks like a car.  Hopefully she gets the stench of shit out of his room.  I imagine it's ground into the carpet along with everything else.  The little guy also arrived with an awful diaper rash too.  Gracie thinks poop is gross and doesn't like cleaning him up so he sits in it and it burns his poor little bum and balls.  Nana cleaned him up well, put on some cream and it was better this morning.

Gracie called this morning and she sounded drunk already, or maybe it's just ativan, I don't know.  Tomorrow my son wants to see the little guy and give him presents, child support would be better than presents in my opinion.  My son wants to go to the library which is closed and we're going into another lockdown today which means we can't meet at the mall food court either.  This causes me no end of stress, arranging these visits which usually end up with my son angry at one or all of us just because he can't plan, organize or get his shit together.  I dread the visits.

So today I'm in a mood.  I've already yelled at the dogs twice this morning.  It's sunny but cold outside so they're in and out and in and out until I yelled at them.  Then they just looked at me and wagged their tails and I apologized to them.  I'm not even mad at them, just stressed.

We have an outbreak at work of a variant of concern.  We found out on the news on Tuesday after work.  My mother in law called me to ask if we were ok.  Finally we qualify for the vaccine but I'm angry that it took an outbreak to get us vaccinated.  I feel disrespected, again.

And then our medical director was being an asshole, again, this week and was harassing one of the x-ray techs, in front of me and the patient.  The tech and I both complained and the doc must have been talked to because yesterday he was nice as pie to me, the tech and the patient.  He's liking living with an abusive or alcoholic person.  They blow up and then apoligize and promise they'll do better and things will be better but things are only better for a week or two and then they go downhill again and he continues to get worse and worse.

The x-ray tech is very hard of hearing and wears hearing aides to help with that. The doc deliberately talks softly to her so she can't hear him;  the tech is who drives the x-ray machine during the procedure.  He does this all the time and everybody knows this.  I advised the tech to make a complaint about discrimmination on the basis of disability because nothing else has worked in the past.  My employer has a policy of no discrimination, blah, blah, blah, which of course is enforced when it suits.  He's a doc so his shit doesn't stink.  He disrepects everyone in our department, even the other rads.  He is an angry, scared little man who likes to bully people so he can feel in control and feel better.

So I'm angry and I want to scream and cry and break things.  I'll just go for a long walk though with the dogs and make them happy and make myself feel better.

I finally finished up the quilt for my adopted granddaughter.  She loved it and called me on Tuesday to thank me.  We haven't seen her since last July and I miss her.  Her mama is one of the nurses I work with and I adopted her as well.

I feel a little better getting all this off my chest.  It's a lot to carry around and it drags me down, especially the crap with the little guy's parents.  He deserves better.
Update.  I worked in the yard, took the dogs for a walk, made some cinnamon buns and shared them with the neighbor.  Some of the funk has lifted.
at April 09, 2021