It's cold and cloudy this morning and we had a dusting of snow last night.  Springtime in Alberta.  On the weekend it was warm and sunny and now, not so much.
The cat is following the sun around the house again. 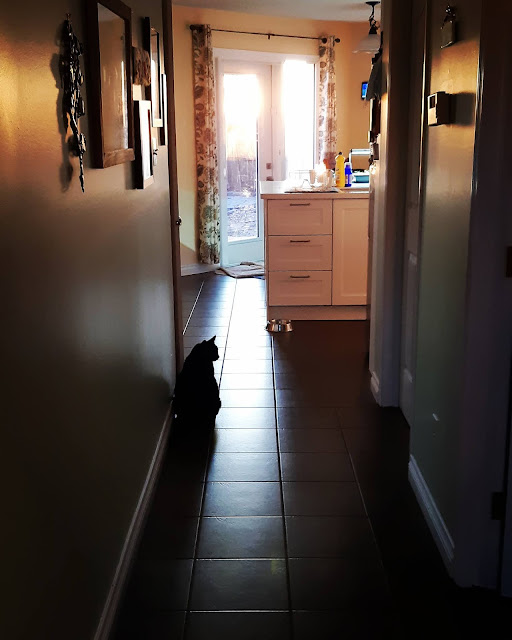 I've been collecting data at work to present to our manager as an argument for management to add another full time nurse to our complement.  When I started working in DI ten years ago we had four nurses on the floor and did approximately forty CT IVs a day, plus another ten in MRI.  We had no recoveries and did fewer central lines.  Today we still have four nurses but CT puts through sixty patients on average each day, we do more central lines, usually two recoveries and still do the difficult IV starts for MRI as well as accessing their central lines.  Our workload has exploded, so, data.  It's more difficult to argue with data.

The other day at work I typed into google, why am I so angry all the time?  I'm not nearly as angry as I used to be when I was younger but I still struggle with my anger.  Women aren't supposed to get angry or at the very least, aren't supposed to express their anger.  Angry women are called bitches, harpies, witches and other less pleasant names.  Anger isn't always a bad thing though.  There are reasons to get angry such as discrimination, racism, sexism.  But there are other reasons too, feeling unappreciated, feeling attacked or unsafe, feeling disrespected, feeling powerless which I'm sure most women and some men have felt at some point in their lives.

At work I often feel disrespected by my employer who not only doesn't understand my job but also doesn't seem to care.  I am completely replaceable, except my patients don't think that and for that I am thankful.  I am asked to do more than is humanly possible sometimes.  I am asked to put patient safety second so that we can increase our numbers and make our director look good.  It's not about good patient care, it's about numbers.  Except people aren't numbers, they're people.

Last week I had a twenty-nine year old young man with metastatic colon cancer which has spread to his liver and lungs.  He has an eighteen month old son at home and he wants to watch him grow up.  He's not a number.

Yesterday I had an indigenous woman, ten years younger than me, with obvious metastatic colon cancer.  Her abdomen was huge, she looked pregnant, because her liver was filled with tumors.  I'm guessing her signs and symptoms were brushed off as women's complaints and/or she didn't have good access to health care because she's indigenous.  She won't live long, her cancer is advanced.  She has six grandchildren.  She isn't a number.

Yesterday I listened to a man whose wife has breast cancer.  He's frustrated with how slowly things go and wants to know why.  Why does his wife have to wait so long in the waiting room for her scan?  Why do they ask patient's names and birthdates so often?  Why can't things be more efficient?  What he was really saying is, "I'm terrified my wife will die?  What will I do without her?"  So I listened to him.

It's goes on and on.  My patients are people and they all have stories and often they need to tell their stories.  A couple of weeks ago I listened to a man for ten minutes while he told me his cancer diagnosis story.  That's not in my job description but it is.  It's a part of him and he needs to tell it so that he can figure out how to wrap his head around it.

I remember when I had my kids, telling my birth stories to my girlfriends.  We all did it.  I didn't know then that's how we process things.  For years I had to tell Katie's story because I did not know how to process that pain.  I don't have to tell her story so often now, the grief has worn down and although I still carry it with me, it doesn't break me anymore.  But stories matter, patients matter and time spent with patients matters because we are humans giving care to other humans.  My patients are all carrying grief around with them, so are their families and their friends.  We are not just starting IVs, we are dealing with grief in it's many forms.