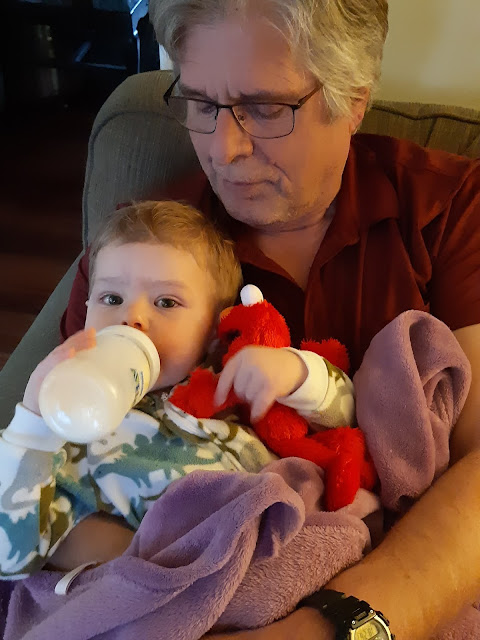 Another day off which is lovely.  My grandson who isn't a baby and also isn't a big boy yet, lying in his poppa's arms, safe and content with his purple blankie and his new Elmo.  Last night he slept for eight hours, in a row.  Heaven for nana.

Work is busy, as usual.  We have a new doc which is interesting and she wants to learn interventionals.  She's loud and laughs and seems quite easy going, maybe a bit of a cowboy.  I like her so far.  We did two central lines together, both young men with crappy cancers.

One of the guys had multiple myeloma and it has left him unable to walk.  He's 6'2" and 280 lbs, not a little guy.  I'm worried about him because he's a big guy and he's crawling on his hands and knees at home and sitting on his bum and pulling himself up the stairs backwards.  I gave him some information about adaptive stuff that he can borrow for home that will make life easier for him.  He said the doctor told him he would get five years out of his stem cell transplant and he seemed okay with that.  I wonder if he thinks he can just get another transplant in five years, not really, or maybe he's okay with only five more years of life.  I didn't ask.  He either has acceptance or hope and both are good to have.  His mom is a mess though and she broke my heart a little.

It snowed the last couple of days but has mostly melted and then it got really cold again last night, so spring in Alberta.  On the weekend it's supposed to be 11C which will be wonderful.

I'm hanging in there okay mentally which is something of a miracle.  I'm getting better at not doing too much on my days off and being okay with that.  I don't always sleep well and try not to stress about that because there is always tomorrow night.  I'm letting roomba vacuum most of the time which helps and I'm learning to ignore dog footprints on the floor, kind of.

Next week the big guy and I will both qualify for the AstraZenica vaccine, not because of where we work but because of our age.  Nothing like being kicked to the curb by your employer.  I'm a very loyal person but they've burned through all of my good will.

My son texted me to say he's left his wife again and now he's gone missing.  In the wind as the cop shows always say.  I did say a prayer for him last night.  I always hope he'll get sober, turn his life around, be there for his son.  I no longer see him as the child I once knew.  He is a man I don't know or trust which breaks my heart still.

My grandson, his smiles and laughter and his curiosity.  This morning he dragged around his potty and wanted to sit on it more than have a shower with his poppa;  so he sat naked on his potty in the bathroom while poppa showered by himself.

My hubby who accepts me as I am, my strengths and my flaws.  And he's an amazing hugger.

A solid roof over our heads, actually, not quite solid.  Some of the shingles were ripped off in a windstorm in January but they'll be fixed soon.

Spring, birds, sunshine, tomato plants pushing through the soil as they sit under the grow light on my kitchen counter.

A quilt to bind for a wonderful little girl.