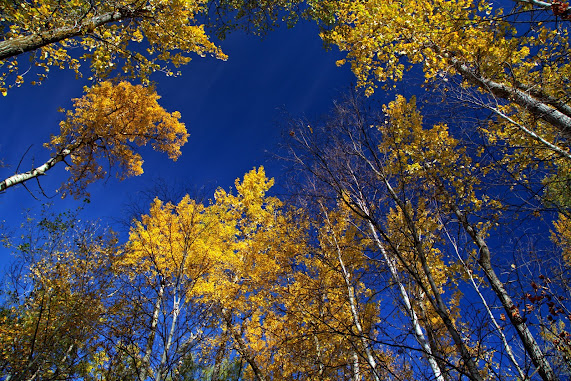 The skies are still blue, even as the temperature continues to drop.    Thanksgiving is this weekend here and I'm stressed.  My sister in law, whom I haven't seen in seven years, is supposed to come for supper with my neice and nephew.  The problem is that COVID cases are spiking in Edmonton and I wonder if this is a good idea.  I thought about eating outside but it's supposed to be cold with the chance of rain on Saturday.  I'm still undecided which I don't like.  I like to know what's happening and like the rest of the world right now, I don't know what's happening.

Work has been busy because, cancer.  Yesterday there was a patient who showed up for her MRI scan;  she didn't make it past screening at the front door but still, she came with a cough, runny nose, red nose and eyes, a fever and no mask.  Apparently once someone comes in our front door they become our responsibility so she was covered up and sent to Systemic to a get swab done, but not without first exposing all of the other patients waiting in line and the screeners at the front to her germs.  WTF.

We had our grandson the last two mornings.  Gracie starts work at seven, so she drops him off at our house at 5:45 and then we take him to daycare.  After work we pick him up from daycare, feed him supper, play with him and give him a bath before she picks him up at seven.  We're all tired and I'm thankful I have today off. 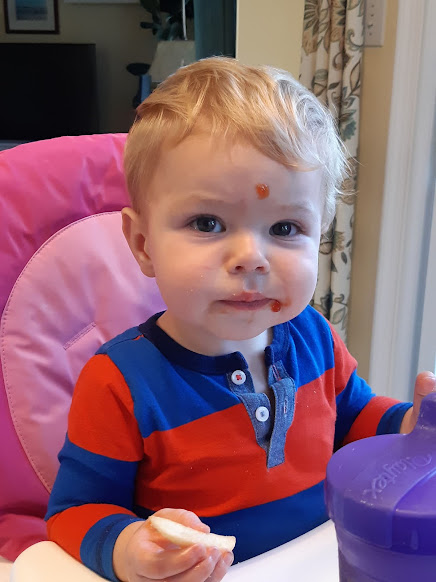 The little guy has discovered ketchup.  He's also discovered how much fun it is to play with our beagle.  When he has a piece of food in his hand, Lucy will chase him around the house, sniffing him, trying to get the food out of his hand.  She's surprisingly gentle with him and he laughs and snorts as he runs around the house with Lucy in hot pursuit.

He's such a sweet little guy and I love him so.  He does our hearts good.