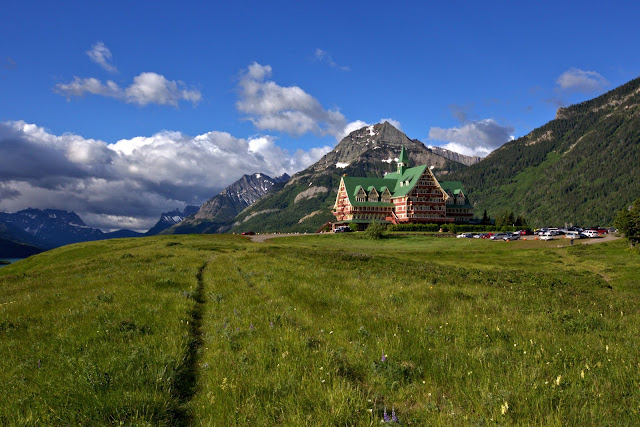 Waterton, Prince of Wales Hotel, a photo from five and half years ago.  I'd like to go back and take better photos now but it's not the same anymore.  They had a massive fire in the summer of 2017.  Medicine Lake up in Jasper had the same fate, massive fire in 2015.  I will never see these forests regrow to their original beauty in my lifetime.

Work has been very busy sadly.  New patients everyday, old patients that just never come back.  One of my favorite patients told me that she's not doing well.  Her cancer is spreading and she's dying.  She maybe fours year older than me.  A couple of weeks ago she was in hospital and her husband picked her up from the hospital and just dropped her off at home so he could go back to work.  She was so hurt.

I told her about how angry I was with my mum when I realized my mum was getting old and would die.  I couldn't understand what was making me so angry all the time until I realized I would lose my mum in the near future.  Once I told my mum this, my anger disappeared.  It's not uncommon to be angry with someone for dying.  Even though it's not their fault and it makes no sense, it's what happens.  I told my patient this.  Anger is a part of grief.  My patient's husband is angry he's losing his wife just when they should be retiring.  It's not her fault and it's not his fault, it just is.  He's grieving and so is she.

My patient is a loving woman, mother and grandmother but she said she's just so tired.  She's been dealing with her cancer for years and it's getting worse.  We cried, we hugged and we shared photos of grandchildren on our phones.  I fucking hate cancer but at the same time I'm thankful for my job that allows me to meet such wonderful people.

Life continues on.  I'm having supper with my niece tonight and then the little guy will be spending the night with us.  My niece is a lovely, thoughtful, outspoken young woman whom I admire and like a great deal.  I'll have to remember to tell her that.

Gracie continues to struggle with depression and anxiety and we continue to support her.  I have no idea how this will eventually play out but we're in it for the long haul with our grandson.   The sheriff came to the door the other night to serve my son papers but I told him we have no idea where he lives.  I hope that one day he'll be the father his son needs.

I'm off today so I have a full day of baking Christmas cookies and bread.  I'll listen to the radio and stay warm.  The dog is curled up on the chair beside me, sleeping hard as only dogs can.