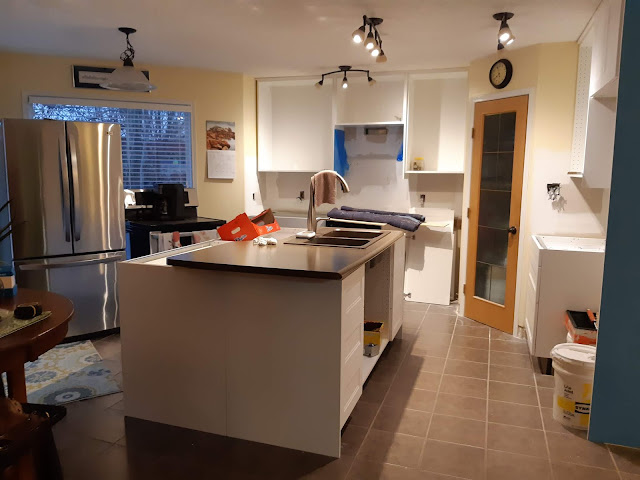 The kitchen is slowly coming along as are my feet.  I will have an enormous island when it's all done which means counter space to work on.  I feel very lucky to be having this done but will be glad when it's all done.  I'm learning patience and I still have a sink which I appreciate.  The countertop for the island won't come for a month because it's a custom piece.  When I ask the big guy about something, he says he wants me to be happy.  I've never had that before.  It's nice.

My feet are a work in progress.  I went to physio again last night and have new exercises and stretches to add to the ones I'm already doing.  I bought memory foam inserts for my shoes and they feel quite pillowy which is nice.

I've been reading up about feet and osteoarthritis and aging and I have come to the conclusion that I have old feet.  Apparently as we age nothing works as well as it once did.  Osteophytes or bone spurs are just my body's way of trying to deal with the damage done by years of walking.  My poor old body is trying it's best and there is nothing I can do to fix the damage done.  Accept yes, fix no.  Like so much of life, aging is about accepting what cannot be changed.  Fuck.

That being said, I'm very lucky.  My mum broke her first bone when she was forty-eight and it was due to osteoporosis.  She broke a lot of bones due to osteoporosis and falls, something which I don't have, the osteoporosis part, not the falling part.  I fall a fair bit although my physio has me working on my balance as well which will be good moving forward, or aging I suppose.

It's strange because I don't feel old.  I feel the same.  I know I've lived longer and compared to many people I'm relatively young but my body would disagree.  The years are starting to add up and eventually the effects of aging will tip the scale and my body will no longer be able to attain homeostasis and the swift roller coaster ride down towards death will occur.  Fun thought.

I'm okay with that though.  It's what happens and can't be avoided.  It's just a strange place to be.  I've never been here before, close to sixty and retirement and who knows what else.  I guess we'll see.  At least I'll have a lovely new kitchen to bake in:)
at November 14, 2019