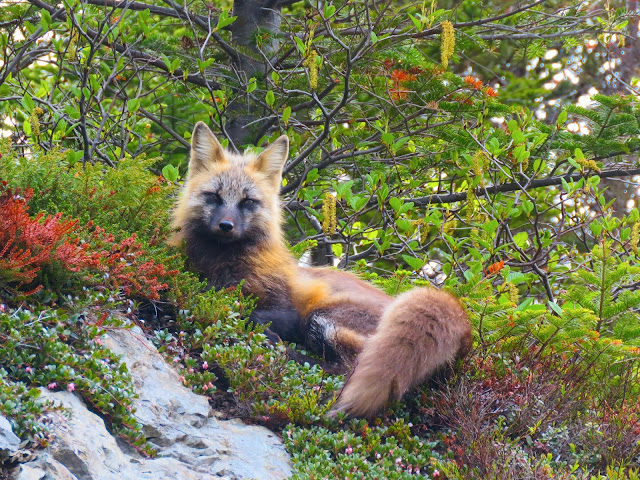 We saw this fox while we were in Newfoundland.  I have no idea if it's male or female but he/she wasn't bothered by me taking photos at all.

I've been feeling down since we got home.  It's so nice to be home again but it's been gray most days and I'm stuck indoors again working.  I miss being outside.  My son contacted me again about seeing his son.  No apologies for lying, more of a "we'll just pretend none of it happened" which is his motto I'm guessing.

I called him on his lies and he got angry with me, accusing me of using his son against him and told me I am a horrible person for not letting him see his son.  My exact words were, you can visit him but I don't want you here if you continue to lie.  He refused to admit he had lied to me about anything.  He's not allowed to go to Gracie's house because there is a protection order in place because of his behavior last November.  Gracie's parents don't want him at their place because he's rude, unreliable and unpleasant to deal with.  I don't want him here as long as he lies and yet he still continues to blame everyone else.  It saps me of my energy.  I'm guessing he's so defensive and angry because he's dealing drugs again.  He has no job but has a new car, new clothes and an apartment.  He must think I'm stupid or gullible and to fair, I am gullible but not as gullible as I once was.

I'm convinced I have dementia because I have difficulty finding words sometimes or forget things.  In fact I just did a dementia test online and didn't have a problem with it so I'm sure it's stress plus normal aging.  I'll look at co-workers I've worked with for years and have trouble finding their name inside my brain, same with objects.  I was telling the big guy about what happened in interventionals yesterday and couldn't remember the name for a sheath until later.  The doc had put in a central line but it was too long so she did an over the wire line exchange which I'd never done before but it went well.  I'm able to do my job well but just can't remember things sometimes.  My daughter has the same complaint so it's probably not dementia.

It was nice to get back to work, even though it's tiring.  I love my patients.  I had a gentleman yesterday who's had four major operations in the past seven months.  He's eighty years old with pancreatic cancer.  I can't even imagine going through that at any age.  He no longer has any pancreas left so his blood sugars are very volatile and his sugar dropped quite low while he was with us.  His eyes were tearing up when he was telling me that his family had been talked to by the doctor when he was in hospital about the possibility of him not surviving the surgery and it's aftermath.

Yesterday I also had a woman only a year older than me with metastatic renal cancer who had a stroke after her surgery to remove her kidney.  She wasn't sure why she had been sent to us.  I explained what had happened and that she was with us for staging and possible clinical trial placement at which point she smiled and said, "Oh yeah, I remember now."

And then a mother and father of a two week old baby, the mother a new patient.  I think it gets to me more than I realize, especially when I'm already tired of dealing with me son.  I had a bad dream while I was on holiday;  a dream in which I tried to avoid ever having my son.

I need sunshine.  I'm having lunch with a girlfriend today which will help as well.  We've known each other for almost thirty years.  He son is a drug addict and her daughter's partner is a drug dealer.  Both children raised in a loving home with good parents and still drugs.  I'm so sick and tired of drugs.