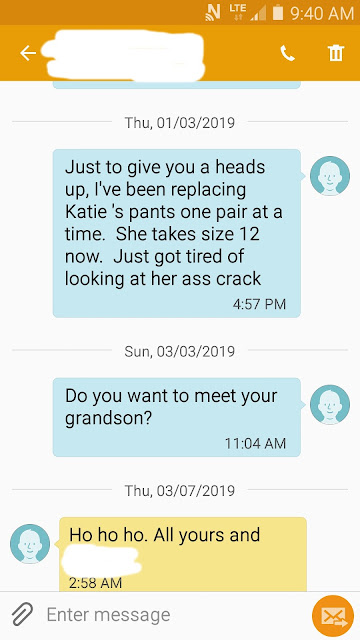 Trying to be a decent human being so I asked my ex husband if he wanted to meet his grandson.  This is what he wrote back.

I met my ex husband when my son was almost three years old.  When my son was five years old, my ex adopted my son.  The second name that is whited out is that of my son's biological father whom I've had nothing to do with in decades.

When I was married to that man, I believed I was crazy.  Turns out I'm not, it was just that I lived with a depressed, angry, vindictive man.  I'm so thankful that he's not in my life anymore and to be honest, I'm thankful he doesn't want to be involved in his grandson's life.  The big guy is already an excellent grandpa.
at March 20, 2019