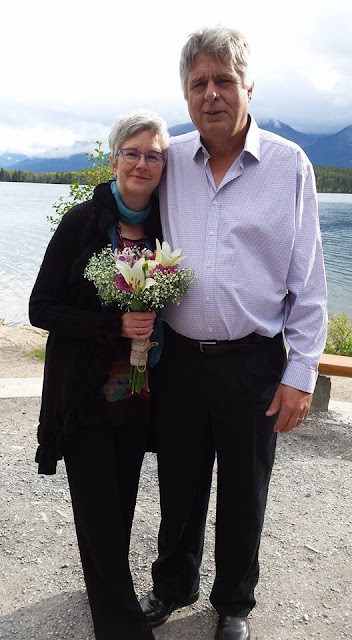 It's our anniversary today, six years we've been married.  I swore when I got divorced that I would never remarry but this guy changed my mind.

Today is a better day, as expected.  My daughter in law cancelled our trip to the spray park when I told her Jack wouldn't be able to come with us and I understand.  She has two kids that want to play with Jack and she had a fight with her mother, so today we are free birds.

I went shopping at Costco and filled up the car with gas.  We now have lots of toilet paper and chicken.  I also got a new book.  I live a wildly exciting life, I know.

My husband just left to drive down to Wetaskiwin to visit his father and I'll stay busy in the garden.  The season is coming to an end and I don't like a messy garden.  I've never grown cucumbers before and got nine huge cucumbers off one plant.  Not sure how many they usually produce.  The tomatoes are starting to turn red.  Last year I got seventy-five pounds from my tomato plants, I'm hoping for more this year.  The sunflowers are done so I cut the last of them to brighten up the kitchen.  I'm also collecting seeds from flowers that I like, yellow cone flowers, foxglove, sunflowers and delphinium to start next spring.  I'll also save tomato and pumpkin seeds.  Jack's pumpkin is coming along well and turning orange now.  I've never grown a pumpkin either. 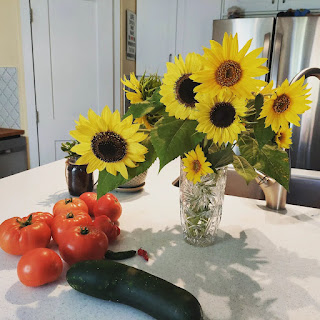 When I received that text message yesterday morning, from Gracie's mom, not Gracie, to let me know that Gracie and Jack were going to BC, I burst into tears.  It seemed like a huge overreaction until I realized that last September Gracie was fired from her job, flooded our rental house and then took Jack to BC.  It felt like it was happening all over again.  Gracie was evicted from her apartment and her second cat died, then she went to BC.  Once I realized that's where the fear and tears came from, I felt better.  Just knowing why I'm upset usually helps me.

Gracie and Jack are being driven to BC to stay with her sister for two weeks.  The driver is a trusted family friend and Jack's aunt is one of his guardians.  I still think it's rude that Gracie didn't let me know herself but in the word's of her mom, Gracie's had a rough week.

Gracie hasn't worked in a year.  Jack has been in daycare since May so she didn't have to take care of him while she looked for a job.  She never found a job and managed to get evicted from a crappy apartment building that smelled like piss in the hallways.  Gracie doesn't have what it takes to care for herself, not to mention a child.  The big guy and I are going to talk to Gracie's mom, Lori, this week and try to sort something out.  They can't stay with Lori for long because Gracie and Lori don't get along at all.

The good news is, Gracie didn't trash our house.  Yay.  Jack is safe with his aunt watching over him.  We have free time, even though I miss him so much.  I'm also back off work because my foot is not healing.

Tonight we'll have supper out at Chianti's which will be lovely and I'll even have a drink.