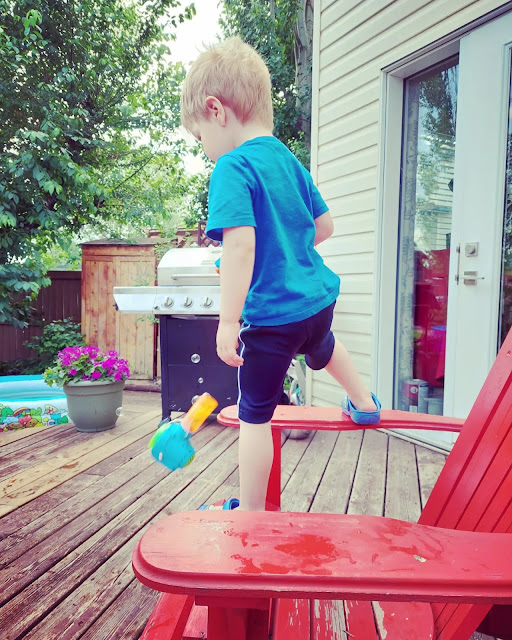 We had Jack this weekend, most weekends.  He was full of piss and vinegar.  Saturday night I thought I would die of exhaustion, but I didn't.  Yesterday was much better and I took an hour to sit outside and read a book.  I say this often and tell others to do the same, but I need to care for myself and I haven't done that, ever.  I take care of everyone else.
I picked up a book last week at Walmart, I think.  It's called "The Change" by Kirsten Miller, a young woman; I wondered what the hell the writer would know about menopause and then, math.   I looked her up and she was born in 1973, not as young as she looks and apparently I have a mental block when it comes to people born in the seventies.  How can they be old enough to go through menopause?
Anyway, the book is about menopause but it's also about women and women's power, the treatment of women, murder, and friendship.  I've recommended it to Ms. Moon but I would highly recommend the book to everyone.  It's well written and made me think about my own power which I seem to have given up.
I've felt old this past year.  It's been a horrible year but I'm not old or powerless and it was the kick in the ass I needed to get my own head out of my ass and reclaim my own power.
I don't know why men are so afraid of women and our power, or us having power.  I don't know why men think that women are disposable, expendable or replaceable.  Not all men, obviously, but it's more common than many would have us believe.  Even lovely men who love us don't understand what it's like to be treated differently because we are a woman.  I had one doc grab me and tell me that I must obey him because I am a woman.  Another doc put his hands on me and sexually assualted me at work, in the report room.  He lost his license and I testified twice against him.
The United States is a case in point right now.  The US has the highest maternal mortality rate in the developed world.  Look it up.  The supreme court in the US has decreed that abortion should be once again be illegal.  Who decided this?  Six men and three women.  Six people who don't have uteruses decided for an entire country what women should be able to do and not do with their uteruses.  Six men have decided that thousands of women are once again expendable, that their lives are forfeit because they may get pregnant and if an abortion is needed, they cannot have access to one.
So a country that doesn't provide universal health care, or a year of paid maternity leave, or affordable daycare or free childhood vaccinations or health care, has decided that what's needed is more unwanted children.  That will solve everything, all of society's problems.  WTF!
It's more complicated than that, but it's not really.  These six men and three woman have decided that what they believe is right.  Except fifty years ago that was not the case.  Are they both right?  Are they both wrong?  Is it any of their fucking business what women do with their bodies?
If women can't have safe abortions there will be more back street abortions.  Unwanted pregnancies will not go away, not with wishing and not with this throwback of a law to the dark ages.  No contraception is 100% effective.  Women will die and children will suffer.
So again I will ask the question, why are men so afraid of women and of us having autonomy over our own bodies?
at June 27, 2022