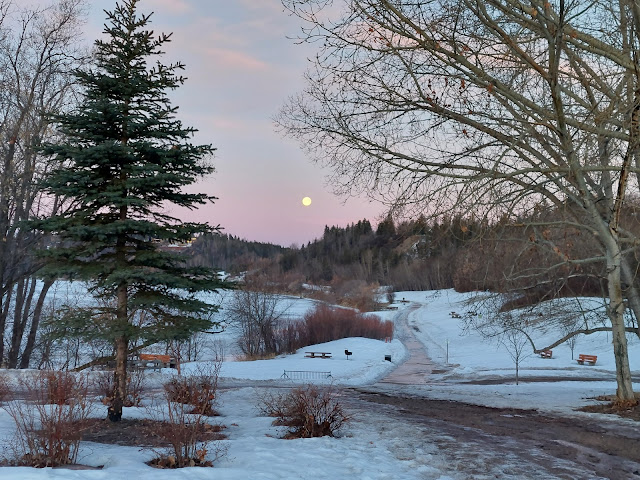 I stopped in the river valley briefly, on the way home, after dropping the big guy off at work.  The snow is melting and the sun is shining now.
Although there is a war in Ukraine, family drama continues.  My son was released from jail two weeks ago.  He said he had found god.  He was staying at the Salvation Army homeless shelter but then he made his way back to his wife and terrorized her for a few days, I'm guessing, before she messaged me and told me what was happening.  I called the police and he was arrested, again.  He also said that another child was being abused which was a lie and he was charged with lying about that as well.  When he got to the police station he started calling his wife, so more charges for violating the no contact order.  He also called here but my husband picked up thank goodness.
Jack is doing well.  We've booked a mini trip to the mountains in June with him.  It will be his first time seeing the mountains and I'm sure he'll be amazed.  Poppa also wants to teach Jack how to pee outside.  We're meeting my middle daughter and her partner there which will be nice.  We haven't seen in each other in three years I think.  Far too long.
We have court again on Tuesday with regards to guardianship and parenting of Jack.  No idea how that will go.  I served my son with the guardianship and parenting applications while he was in jail, so at least that got done.  I'm just so thankful that Gracie is no longer in our rental.  She can destroy someplace else and it will be her family's problem, not ours.
The insurance company have agreed to repair the floors and drywall that were destroyed and we have a contractor so just a matter of picking out flooring and waiting for it to be done.
As for me, I've decided not to retire this year after all.  I don't have much of a pension, most of my money is self invested in an RRSP and over the last month my investments have taken a big hit.  They've lost ten percent of their value which makes me too uncomfortable.  It's not a problem.  I have readjusted my thinking and things will be delayed by a year.  I do need to work on more of a balance in my life between taking care of others and taking care of myself, as if I haven't been saying that my whole life:) 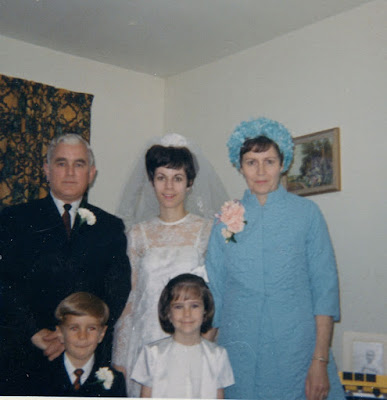 I've been going through old photos from time to time.  This photo would have been taken in the late sixties, sadly, I can't remember which year my sister got married, or why my mum thought that hat was a good idea:)
at March 18, 2022