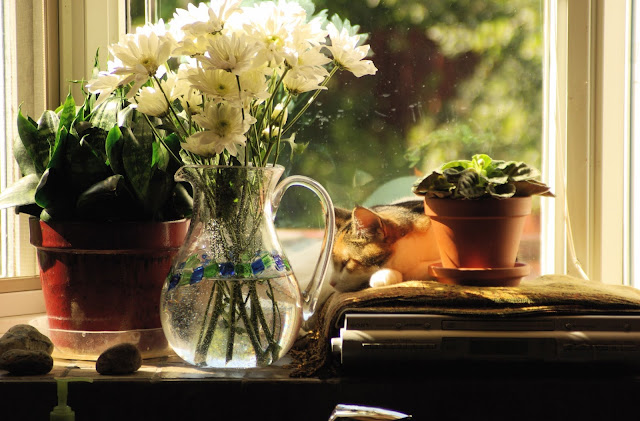 This is probably one of my favorite photos from my old house when I was still married to my ex husband.  That window was in front of my kitchen sink and had room for my radio and my plants.  The African violet was from a patient who died in the 1980's, Laura was her name.  When she died, nobody picked up her things and I thought that was so sad.  I took her violet home and took care of it for years before it too died.  The cat curled up in the sunshine was called Maggie and if you sat down, Maggie would sit on your lap.

At the time I took this picture, 2010, I had no idea about apertures or bokeh, and the soft out of focus yard in the background was only a happy accident.  I've learned a lot about photography in the past eleven years and enjoy taking photos so much but between covid and Jack, photography seems to have been put on hold.

When I was a young woman, I would have thought that this was the end.  I'll never get back to photography but as I've gotten older, I realize that life truly is just a progression of lazy circles that continue to turn and turn and turn.  When Jack is older, when I've retired, when I have time, I'll come back to it.  I still take tons of photos with my phone but I do miss my big camera.

It's raining here today.  It's not supposed to rain here in the winter time.  It's dangerous because the rain freezes on the roads, making things slick.  I'm stuck in the house, still, feeling like crap, still, but I did pop outside to the backyard to take this photo.  Photos always make me feel good.  I know for a lot of people it's music, but for me, it's visual, images. 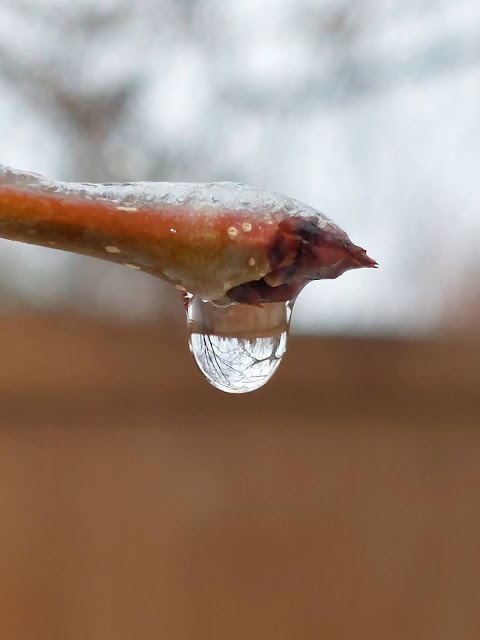 I hate sitting around doing nothing.  I'm bored out of my mind waiting for my sinuses to empty themselves out.  I've been in pyjamas since Sunday night, that's not right:)  I did manage a shower yesterday which was good but really, what's the point?

Jack is well and when the big guy dropped him off at daycare this morning, the ladies there said Jack is always a happy boy since he started living with us.  That feels good. We made a difference in his life.  He's sleeping better and he no longer obsesses over "owies" like he did when he first came back from Victoria with me.

We shall see what the future brings as it turns and turns again.