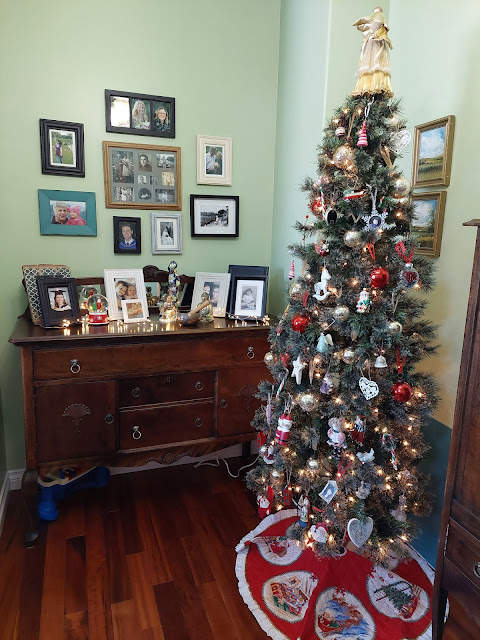 Jack has given me another cold.  I've got a sore throat this time and I went for a covid test this morning.  Oh joy.
Gracie has gone into rehab and I hope and pray that it helps her.  Her mom and sister have applied for guardianship as well, but not day to day parenting.  They don't seem to understand how this thing works.  Gracie doesn't want us as guardians but wants us to take care of him for her.  The big guy and I decided that unless we become guardians as well, we will not be doing to the day to day parenting.  Her mother and sister will have to step up and do that.  I know for a fact that her mother has no desire to take care of Jack on a daily basis, even before her husband died.  Gracie and her sister seem a little clueless at times, but that is part of the problem.  So we're good enough to take care of her son but not good enough to be guardians of him.  I had a good cry about all of this on Friday when we were served papers by Gracie.  Fortunately it's up to the judge on the 14th and it's based on what's best for Jack, not his mother.
The charges in Victoria were also dropped we found out on Friday, another reason I cried.  The big guy thinks it's probably because there is such a backlog in the court system due to covid.  It doesn't change anything for me.  The bruises on Jack and his neglect happened on her watch.  She is responsible.
Way too much drama.
My niece and her boyfriend came over for supper last night which was so nice.  We haven't seen them since June.  It's nice to spend time with young people who aren't batshit crazy.  My niece graduates with her Masters in occupational therapy in two weeks and starts a new job in January.  Her boyfriend works with computers and coding.  They pay their bills and speak in full sentences.  It's so refreshing.
I have to stay at home today because I'm waiting for the covid results.  Not a huge deal as it's bloody cold outside.  It's a good day to not do too much of anything.  I did put up the tree though, so there's that.
at December 05, 2021