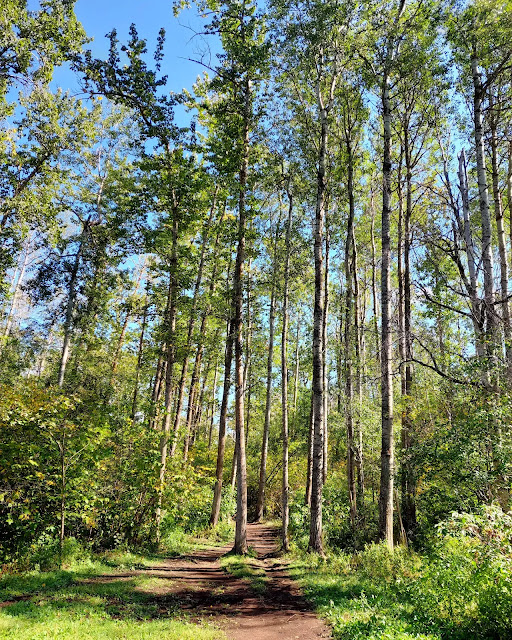 I can't figure out how to use my new photo editing software so I'm stuck with phone images for now.  I might have cried when trying to figure things out.  I don't know why I'm so weepy this morning;  I do actually.  The world.  When I'm on holidays I can much more easily ignore the world but in real life, there is too much world.
The world seems to consist mostly of screaming, angry people right now, myself included.  Covid rates are skyrocketing here, as are hospital admissions and ICU admissions.  If only we could have known this would happen, if only there had been some kind of warning.  My employer is now hiring travel ICU nurses for between $5 and $33/hour more than I make, and they still want us to take a pay cut.
There are anti vaxxers protesting outside of hospitals here, making it difficult for staff and patients to get to hospitals, angry that their rights are being assaulted.  They have no responsiblity apparently for this fourth wave, even though they make up 75% of hospitalizations.
Texas hates women, or so it seems.  Greg Abbott said, “That said, however, let’s make something very clear,” Abbott continued, his voice gaining emphasis. “Rape is a crime, and Texas will work tirelessly to make sure that we eliminate all rapists from the streets of Texas by aggressively going out and arresting them and prosecuting them and getting them off the streets.”
So he isn't going to stop rapists until after they have raped someone, unless he plans on locking up all men as potential rapists. Apparently logic and critical thinking skills are not taught in Texas schools.  So women will die having non medical abortions.  WTF!
Jack stayed with us again last night.  He was beside himself at bedtime, screaming and crying and flailing.  This is not him.  His poppa sang to him and held him.  He woke again in the night crying and restless so I lay down with him until he settled.  This morning there was more screaming about leaving the house and going to daycare.  Two weeks with his mom have turned Jack into a monster and it breaks my heart.  Gracie needs to be an adult and can't it seems.
And my son is back in the picture.  He keeps trying to contact me.  Nothing has changed, except he's lonely.  Does that mean his wife has kicked him out of the house?  No idea.  I just know I don't want to get dragged down with him.  I have enough shit.
Not everything is bad, sometimes it just feels like that.  I'll get outside today with the dogs and that will help.  My coworkers missed me which was nice to hear.  Jack will get better with time and consistency.  I can do nothing about stupidity and ignorance.  I can breathe.  There is still good in the world, despite appearances to the contrary.
at September 08, 2021