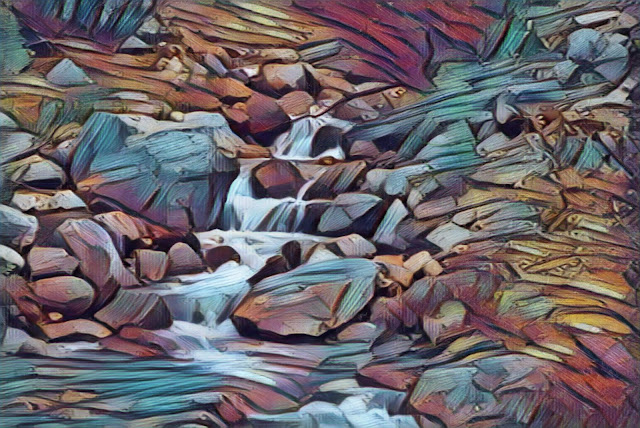 Another one of my photos, transformed.  I quite like it.  I wish I could paint and perhaps one day I will, but until then I can use Corel.
Covid cases are continuing to rise in Alberta, thanks to our useless premier.  He likes to blather on about rights and freedoms but makes no mention and doesn't seem to understand responibilities or obligations.  He is a waste of skin in my opinion and an embarassment to Alberta.  He is widely disliked by both conservatives and liberals, quite a feat in itself.
Work is busy.  One of my coworkers, the one who drives me crazy, has carpal tunnel syndrome and has been off all summer which has been nice for her but means that we work short often.  This woman has no credibility though and nobody believes she actually has carpal tunnel syndrome.  She often takes long periods of time off or calls in sick as revenge.  She booked off sick when her church moved and she couldn't get the time off.  There is history there.  The upside is that she's not at work so nobody is irritable or pissed off.  She has that effect on people.  We're all working well together.
The nurses in Alberta are being asked to take a 3% pay cut which is offensive.  Young nurses are leaving the province or the profession and there will be a shortage of nurses in the near future, thanks to no long term planning by our provincial government, see above.  Nurses have been working short for the last eighteen months, stressed out about Covid and generally overloaded.  Now summer vacations are being denied because of self induced nursing shortages by our employer.
The nurses in my department have an amazing manager though and she realizes that we will break without vacations so she has moved heaven and earth to make them happen.  The big guy and I leave on vacation on Sunday and as I said to someone, I am almost giddy with the idea of no responsibilites and no obligations.  Gracie and her mother will have to sort out childcare for Jack, or in other words, be adults.
Gracie is struggling again, or still.  It's hard to keep up.  She works nights and it makes her tired.  Shocking, I know.  I worked nights for years because of a lack of childcare and was tired for years.  Tuesday at supper time, just as we were going to sit down, the daycare called to say that Jack had not been picked up by Gracie.  The big guy went to get him and we fed him supper.  Gracie called and said that she hadn't woken up.  Jack was supposed to stay with us anyway that night so we just kept him.
Last night we picked up Jack on the way home from work because we hadn't heard from Gracie.  She texted me later and said she had just woken up and would come get him.  So I fed Jack supper and we waited.  When she did come over she looked awful and seemed dazed.  The big guy told her that we would keep Jack again last night and she went back home to sleep.  Hopefully this afternoon she will be awake to care for her son.
I'm not sure what's going to happen while we're gone but she will have to deal with it.  Jack wants to spend less and less time with her as he grows up which I'm sure must be heartbreaking but can you blame him?
I'm spending my day off running errands, cleaning and getting things ready for our trip.  We going to heaven, or Ucluelet as most people call it.  Five days and nights spent on the beach and roaming through the rain forest.  Many photos will be taken and there will be many long walks.  The dogs will be tired and the big guy and I will get our batteries recharged thanks to mother nature.
at August 18, 2021