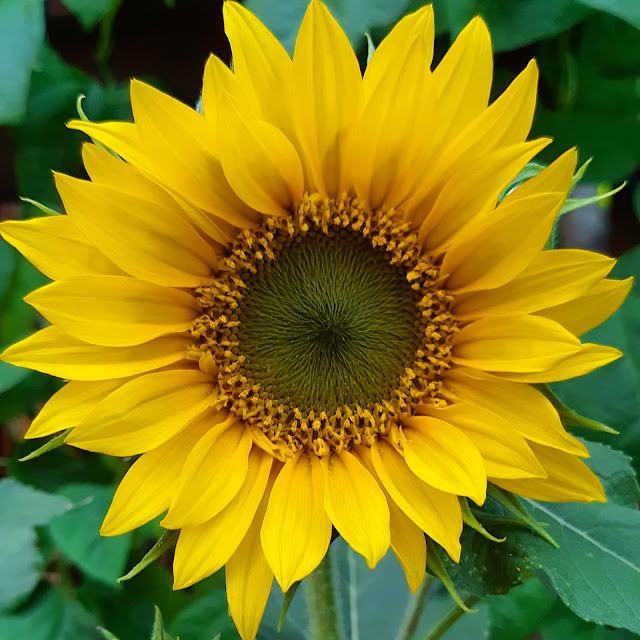 I grew some sunflowers from seed this year, dwarf sunflowers, and they're just starting to bloom.  They make me smile.  I also bought some prairie coneflowers which I have never seen before.  We'll see if they survive the winter.

The pole beans are amazing.  They have climbed the trellis and I've had to top them off as they wanted to climb higher.  They've only started to flower now.  I'm not sure how long they take to produce the beans, hopefully, less than a month. 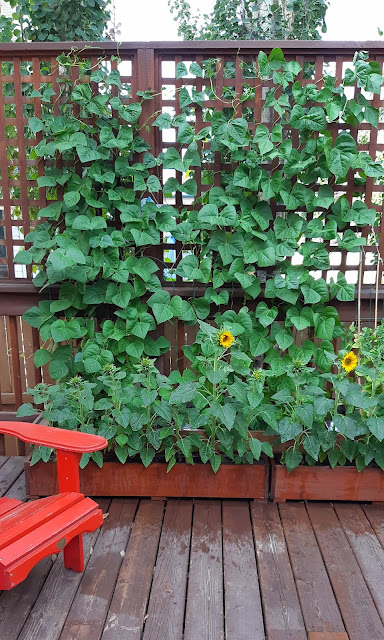 The tomatoes have been enjoying the heat and I've had to top them too because they've gotten ridiculous. 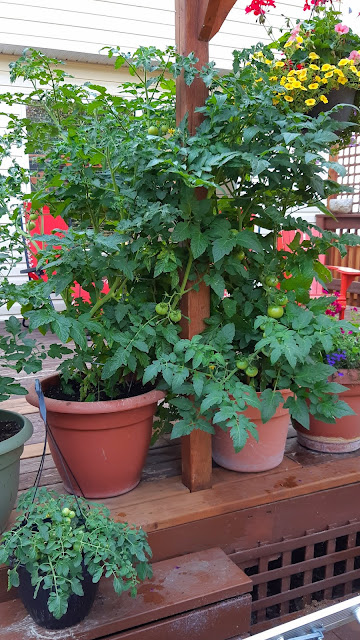 It's been busy at work.  When isn't it?  Two days ago I had a young man with a rare form of cancer.  He's only twenty-seven but looks much older.  I thought his mother was his wife.  He's dying but I don't know if he knows or understands that yet.  His belly is distended with something called ascites, a buildup of fluid in his belly.  This happens with end stage cancer and liver disease, but in his case, it's the cancer.  Once we see ascites, patient don't live a long time.

He had a drain put into his abdomen a week ago, to drain the fluid because it continues to build up, making it hard to breathe, and the drain was causing him pain.  I changed the dressing, had him assessed by the doc who put the drain in and we talked, the patient and I.  He wants to have children he said.  He still thinks that's a possibility and it broke my heart. I didn't tell him he's dying.  Didn't tell him that he's only going to get worse.  He's twenty-seven.  He still believes there is a future for him.  He still has hope and I couldn't destroy that.

Yesterday we had a woman, a year older than me, slated for a port insertion.  On the requisition it said that the patient was autistic and nonverbal.  I talked to the doc and he said he wouldn't do it.  He said it would traumatize the patient and the nurses and himself.  This poor lady had a biopsy in our department a month ago and had to be held down, even after giving her ativan.  She sat up and contaminated the sterile field during the biopsy.

I talked to the patient and her caregiver.  I told her what was involved.  She would get a minimum of eight needles into her neck and chest.  There would be a metal tunneler going under her skin and there would be a lot of pressure on her neck and chest.  The patient would have a drape over face and would have to keep her neck turned the whole time and not move while we did this.  I told her all the facts that I usually gloss over.  The caregiver agreed that it wouldn't work.

The caregiver seemed to think the patient didn't know what was going on because she can't talk.  The patient sat up during the biopsy;  she was clearly communicating that this was not what she wanted.  Katie can't talk and doesn't miss a thing.  Behavior is a form of communication.  I told the patient that we would not be doing anything to her today, no needles and she relaxed.  As they were leaving I also noticed that the patient had a huge burn scar on her right neck and chest, another reason we couldn't have put the port in.  It will have to go into the left side of her chest which is more difficult and more painful.

I called the oncologist, who seemed slightly irritated that we wouldn't put the port in and then told him he would have to arrange for it to be done at another hospital, which also irritated him.  What I didn't say is that if it was my disabled daughter, I would not do any of this.  The patient is sixty years old.  I'm sure she has had a lot of trauma in her life, even if she can't express it.  Chemotherapy would only add to that trauma.  It's inappropriate in my opinion.  We all have to die but we don't have to traumatize this poor lady again before she dies.

I'm off today.  A day to weed the garden, work on some sewing, clean the floors and walk the dogs later.  I'm trying to not push myself so hard to get things done, to take some time for myself, to relax.  I'm not stressing over my children, they have their lives that they will have to sort out and I need to let go of what I think they should be doing.  I have my own life to deal with.  Of course I want them to be happy but I also don't have control over that.

I read an article the other day, and heard a radio program the same day, about magic mushroom reasearch.  Apparently there is research going on to treat depression and PTSD with micro doses of magic mushrooms.  The article is here.

It would be nice to be rid of the black dog for good.