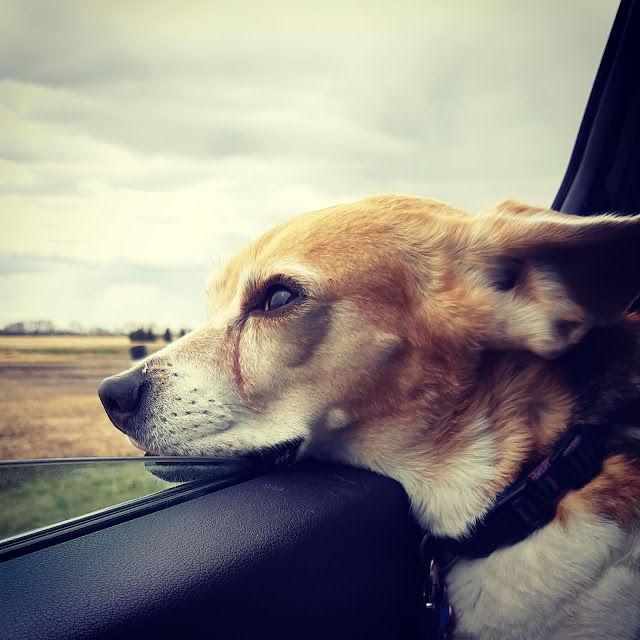 We drove down to Wetaskiwin yesterday to visit my in laws.  They're fully vaccinated and my hubby and I have both had one shot and all of our covid tests have come back negative.  I made a casserole, salad and dessert so that my mother in law didn't have to cook for us.  We haven't had a meal with them since last July.  The visit was nice and Lucy especially enjoyed the car ride.

Storm clouds on the way home.

My son continues to fuck up his life.  He didn't show up for the last two visits that he had arranged with Jack.  And yesterday someone showed up at our house to serve my son with papers in the hopes that I could pass them onto my son with the next visit.  Apparently my son hit a cyclist almost two years ago, injured the cyclist and is being sued for $400,000.  It never ends.  Instead of dealing with the consequences of his actions he has decided to never see Jack again so that I can't physically serve him with the papers.  I texted him photos of the papers.  I don't know if it's legal but I've done my bit.

I try very hard to not let it bother me but I think I grieve everytime there is new information about my son.  He went to jail for dealing drugs, grief.  He went to jail again for dealing drugs, grief.  He was arrested, grief.  Jail for domestic violence, grief.  Attacking Gracie when she was pregnant and more jail time, grief.  His failure to provide for Jack or even see Jack, grief.  Neverending lies, alcoholism and drug dependence, more grief.  And now this.  I grieve with every new instance and I need to figure out to let it go, to let go of the son I thought I had and to see him for what he really is.

I am protecting Jack from violence and lies and chaos but sometimes it feels like I'm keeping him from a father's love, but I don't think there's really much of that.  My son cares for no one but himself and how that person can serve his self intersts, including his child.

My hubby is a wonderful poppa and male role model for Jack.  He is patient and kind and gentle.  He is even tempered and rarely gets angry, almost never.  He and Jack love each other very much and that's a good foundation for life.