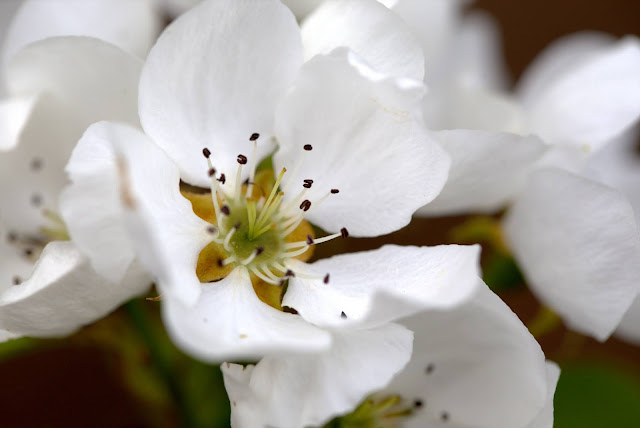 The snow has melted and the flowers are blooming.  This is a bloom on our ornamental pear tree.

I had a horrible dream last night about a serial rapist, although the rapist was convinced he was doing a good deed.  He was the groundskeeper for an apartment complex of older women and regularly raped the older women there, every one of them.  I moved into the building but because I was only thirty years old he told me that I would have to wait until I was older.  Then I was in the shower and there was a window in the shower.  I looked out and I could see the guy and he saw me.  I quickly closed the curtains but when I turned around he was in the bathroom opening the shower curtain.  For some reason I had a bathrobe on and I started screaming and making a lot of noise which made him reconsider.

In my lifetime I have been sexually assaulted a number of times.  When I was a young woman, a guy wouldn't let me out of his car and I cannot remember what happened, other than he wouldn't let me out of the car, even though I kept asking.  When I was nanny, out walking the little girl I was taking care of, in a public park, a guy ran up behind me and pulled down my pants.  A doctor at work said he could help me with my back pain, took me into an office, undid my bra and put his hands on my breasts.  It was all so surreal.  My ex- husband tried to rape me one night when he was extremely drunk and I had a house full of kids for a sleepover so he knew I wouldn't yell at him.  I got away from him and of course he didn't remember anything.

I wonder if my own daughter has ever been sexually assaulted which is a thought that breaks my heart.

Right now at work a group of us have made a complaint against our medical director, a man.  The group is predominately women, only one man has put down his name.  It's now in the hands of more men, directors and such, and will be sent to the College of Physicians and Surgeons, more men.  The findings will be kept confidential because apparently that's the best way to deal with problems, not make them public, sweep them under the carpet.  Wonder who made up that rule?

And as I write this I'm starting to see a connection between my dream and reality, the feeling of powerlessness.  Men still make the rules and I wonder why I still accept this.  I wonder why women in general still accept this and I feel angry and sad.  What the fuck did women ever do to men to make them treat us less than?  Which is the wrong question.  What is wrong with men that they think it's okay to treat women like this?

When we made our complaint last Monday, I went in and talked to our manager, a young woman, who has been the best manager we've ever had, to give her a heads up.  She has pored her blood, sweat and I'm sure tears, into our department, trying to make it a better place to work.  She wanted to know what she had done wrong.  I told her that this is not about her, this is about our medical director.  This is not her problem or her behavior.  This is about a man who has power and uses it to bully people.  Why do we do this as women?  Take on the blame for the actions of others?