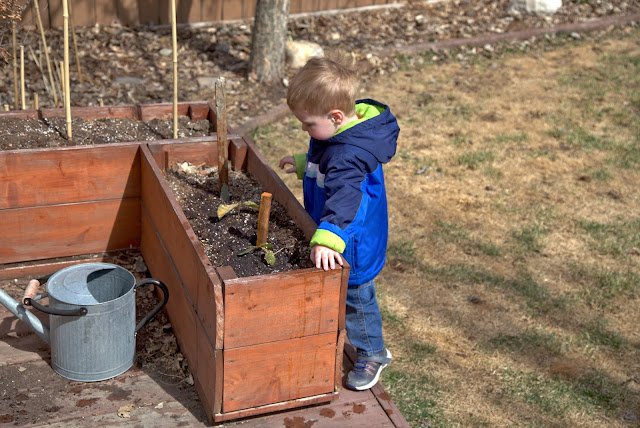 Jack helping me in the garden a few weeks ago.  Last weekend he was quite helpful while I planted my pole beans.  I poked a hole in the soil and he put the seed in.

He also likes to water. 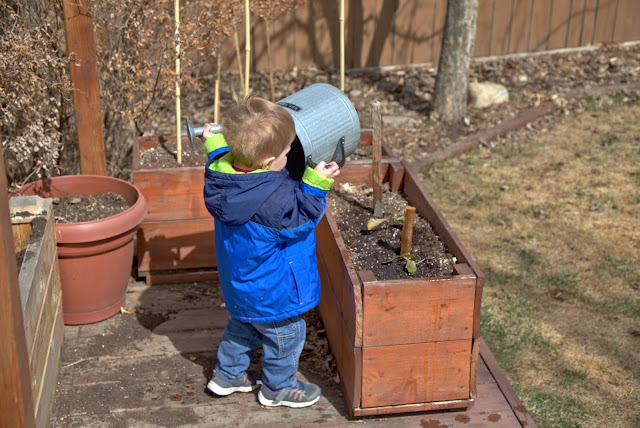 I picked up Jack last night from Gracie's place because she is working today.  He stays with us overnight and we take him to daycare in the morning because she starts work before the daycare opens.  I had told her that I would be there at 6:30 pm and I was.  I just walked over there;  it's not far.

When I got there and rang the doorbell there was no answer so I rang again.  Finally Gracie appeared at the door;  she was either drunk or on ativan, not sure which but she gets weird and I can spot it now. She had been sleeping and Jack was still sleeping.  She woke him up and he started crying.  His hands and face were covered in red paint and he hadn't eaten any supper.  Gracie wanted me to look at the bike she had bought him while poor Jack was crying.  I bundled him into his buggy and walked home with him.

He was upset and hungry when we got back to our place,  but he wouldn't eat anything and only wanted milk in his bottle.  I gave him a bath and washed the paint off and once again he had a horrible diaper rash.  I was angry at Gracie.  I was very angry at Gracie.  Angry that she's still the better choice as a parent for poor Jack.  Did I mention I don't like alcoholics.  I know it's a disease.  I know it's difficult.  I know it's how those people are dealing with their pain and their trauma but my trauma came at the hands of alcoholics.

I'm better this morning but I still might like to punch her in the throat.  It's the diaper rash that gets me.  It hurts him, scalds his poor little balls and would make me miserable as hell.  It breaks my heart everytime.  I have talked to her many times about this, even yelled at her once.  She has cream, she has diapers but she doesn't like poop.  It's yucky.  What did she think would happen when she had a baby?  That she would get a self cleaning one?

I don't really say much to her, the big guy is better at talking to her.  I have basically zero diplomatic skills and can't stand listening to bullshit.  I also have a face that shows every emotion I feel.  She's trying, I know, but her trying just really sucks sometimes.  She'll be fine for a week, seem normal, everything is good and then she tips over into trashy mama, dirty kid, unfed and unbathed, filthy house with Jack picking up stuff off the floor to eat that's been there for awhile.

I'm hoping we can keep him again tonight.  I'm off all week to work in the garden, do my spring cleaning and burn some holidays.

I feel better getting this stuff out.  It can't be fixed.  Jack loves his mama and she loves him.  Some of the time she's a good mom.  We have no rights and we are allowed to be in his life because of his mom.  I will not jeopardize our relationship with him so I keep my mouth shut and tell Jack that nana loves him very much.