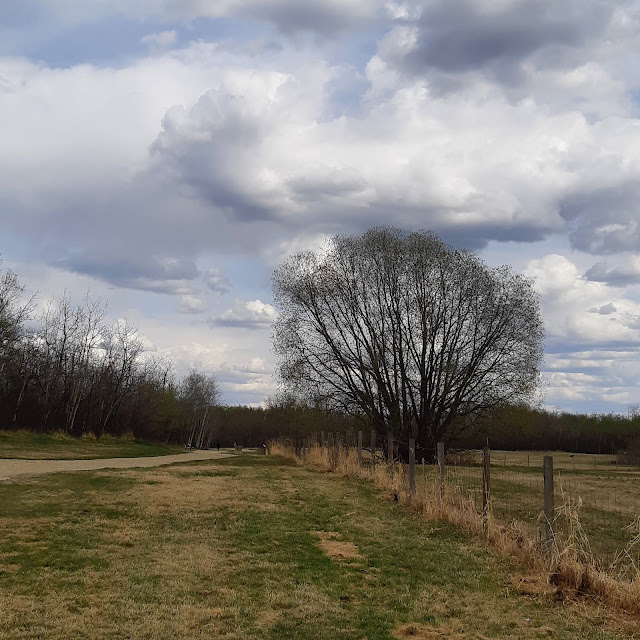 We went for a walk with the dogs after work yesterday.  Fresh air always feels good.  It's been a strangely good week at work.  We've had enough staff for a change.  There was an ultrasound machine that didn't want to work but three restarts and half an hour later, we finished the PICC line.

I know I'm lucky to get my people fix at work when so many are stuck at home.  My patients are wonderful and most of the my coworkers are amazing people.

Mother's day is coming up on Sunday which makes me think of my mum.  Her and I didn't always have the easiest relationship.  Mum could be critical and manipulative in a sneaky way.  I know she loved me and I loved her but it was difficult at times.  I was her primary caregiver for the last six or seven years of her life.  My siblings visited rarely which always made me angry because for mum, her family was everything.  She did so much for us, helped all of us so much and that was how she was repaid.

She cared for my oldest sisters children for years while still raising me and my brother.  My other sister was hit by a truck at the age of twelve and mum cared for her until she recovered but my sister was never the same.  My sister was left with an undiagnosed brain injury which wasn't diagnosed until much later in life.  Mum helped me with my kids, especially my son while I was going to college, and my parents helped my brother and his wife buy their first home with a loan that he never repaid.

Family and especially children, were the most important thing to mum.  I guess I inherited some of that from her, along with her sense of humor.

And now I have a daughter that I am estranged from.  We're a lot alike which is probably part of the problem.  Plus there is Miss Katie.  There is only eighteen months between my two girls and growing up with Katie was not easy for her.  Katie took up most of my time.  Katie is still a small child mentally so I love her differently.  She is still vulnerable.  My middle daughter grew up and away from me.  Katie never did.  I wonder if my middle daughter thinks I don't love her as much because of this.  I love them differently.  Perhaps my own mother loved us all differently too.

I always knew that my oldest sister was my mum's favorite.  I was the difficult child.  Too sensitive.  The rule breaker.  Except I really wasn't.  I was sensitive but as a child and a teenager I was anything but a rule breaker.  It wasn't until I was an adult that I realized that not all rules were good rules, that I did not live in the world that my mother and father had grown up in.