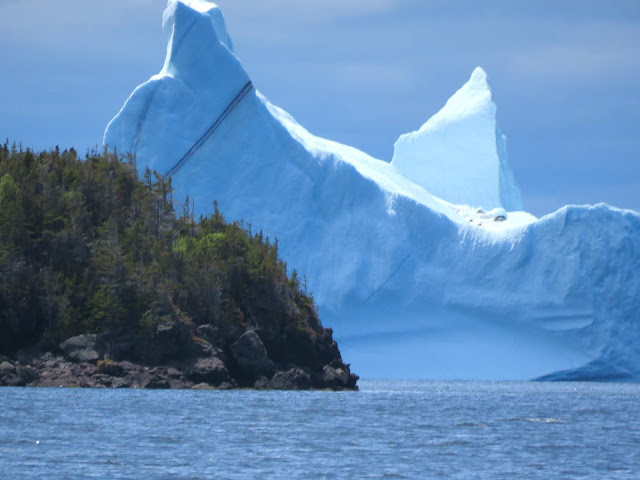 One of the big guy's shots taken as we approached the iceberg that we saw out in Newfoundland.  Gives you a better perspective of how large it was.

I saw my counsellor this week because I've been feeling overwhelmed and depressed.  Mostly we talked about my son, an ongoing theme with me.  She pointed out that I should not be letting him disrespect me or be verbally abusive with me.  She also suggested I lower my expectations of him.  I expect him to tell the truth to me.  I find it disrespectful when he lies to me and then I get angry.  She suggested I meet him where he is, stop asking questions I don't want to know the answers to and accept that for now, he and I will not have a genuine relationship.

I hate being lied to.  My son's biological father lied to me about everything.  My son has a half brother who is only two weeks younger than he is.  Fortunately I didn't learn about that until much later.  When you to lie to someone you destroy your own credibility.  It makes a genuine relationship impossible because you have no idea of who they really are.  We all lie, usually to avoid uncomfortable situations or feelings and I get that.  I lie to myself all the time and maybe that's what bothers me too.

I tell myself that I'm fine, even when I'm not.  Even when depression is dragging me down into the black hole.  I hide my depression because it makes people feel uncomfortable.  Because it makes me feel weak, like I just can't deal with life and what the fuck is wrong with me.  Mental illness still carries a stigma.  According to Dr. Google, 5% of the Canadian population have reported symptoms of major depression in the last year.  I'm part of a group.

I work on not being depressed.  I walk.  I spend time outside.  I spend time with my grandson.  I ask the big guy for hugs.  I garden. I write.  And still it stalks me.

Anyway.  Enough.  I can accept that my son will lie to me.  There is nothing I can actually do about it.  It's his life.  It hurts me to see him flush his life away but there is nothing I can do that will change how he lives.  I always forget that I have no control how other people behave.

I need to change my perspective.