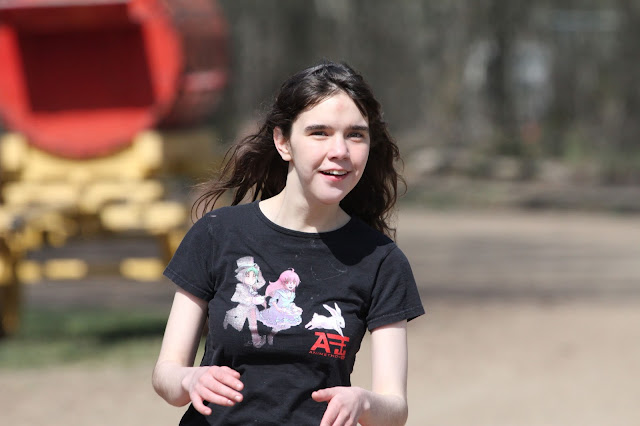 I was out for a walk the other morning before work when I got a phone call from Katie's caregiver.  He rarely calls so I was worried when I answered.  I could hear Katie fussing in the background so I got even more worried.  Turns out he was just calling to let me know that he had gotten Katie's table for her wheelchair fixed and that the bill was $300.  He wanted me to know and had forgotten to email me.  I was relieved.

When I went to say goodbye, I asked him to say hi to Katie for me and to tell her that I love her.  Katie hates phones and won't have anything to do with them.  I overheard him passing along my message and then I heard her blow me a kiss.  She's never done that.  Of course I started crying as soon as I hung up the phone.  She surprises me still and I'm thankful for that.  So often it seems as if I don't really matter to her and then she does something surprising.

I love this photo of her, down at Fort Edmonton park.  She's running, not in her wheelchair and that's how I like to see her.

I continue to work on my stoicism with some success.  I'm getting better at standing back and asking if I have any control over "this", whatever "this" may be.  It's getting easier.  Less fatigue at the end of the day.  Less bitching and complaining, from me.  My coworkers remain unchanged but my reaction to them has changed, which is all I really have any control over.

Winter is settling in here.  The temperatures have dropped.  We had some snow the other day which brought the city to a virtual standstill.  Only a little snow and everyone forgets how to drive apparently.  One of our young nurses was two hours late for her shift and came in just vibrating.  I told her that it was ok.  She had no control over it.  Let it go.  The days are getting so short now.  Dark for the drive to work and dark for the drive home.  Sigh.  I miss the light.