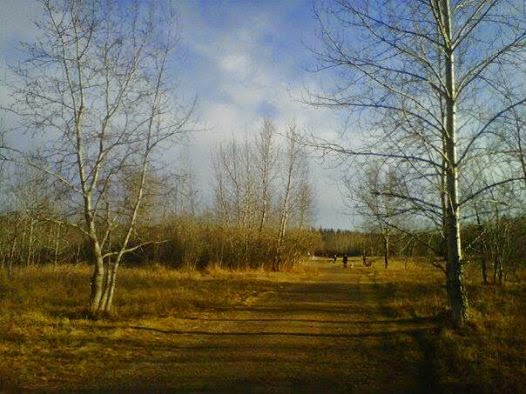 I took this photo with my phone.  It reminds me of a painting;  I think it's the light.  That was the river valley last weekend.  This weekend it's covered in snow and ice.  Sigh.

I haven't been writing much but I have been thinking a lot.  I just found out another friend has been diagnosed with cancer.  The total is three now, all of them younger than me.  I know we all die.  I know that 2 in 5 people will get cancer during their lifetime.  Facts aren't people though.  Facts don't work with you, don't call you when you're feeling depressed, don't go shopping with your or have you over for supper.

I've been very lucky really.  My children are healthy.  I'm healthy.  The big guy is healthy.  I have a job.  My mortgage is almost paid off.  But what I wants is my friend to not be dying.  As I type this crème brulee is cooking in the oven for her.  She loves crème brulee.  It's got lots of calories for her and she can taste it.

I just feel kind of lost lately.  I'm past middle age now.  I'm fifty-two.  This is the last act of my life and I still feel ill equipped.  It feels like time is running out for me, although I'll probably live into my eighties, it still feels like the clock is winding down.  To what purpose?

I have three children.  I did a barely adequate job of raising them.  I have hurt those I love.  And I just really wonder what is the point of this whole thing.  I had a dream last week that seemed to go on forever.  Like most of my dreams it included all kinds of bizarre shit but the final bit of my dream was me falling to Earth in a spaceship, being told that I would have to keep going back (to Earth) until I got it right.

And that's what I've been doing for the past few weeks, months, for the past year it seems.  I guess I expect there to be an end point, like the end of a race.  And there will be something waiting for me, a prize for a medal or something, some way to know that I have made it, that I have gotten it, that I have figured it out.  When in reality there is no end point but just a continuing journey, of which this life here, is only one small part.

I work with a woman who just wants to have a good time.  I'm not judging her, it's just the way she is.  She wants to go out on the weekends, loves parties, wants to have fun.  And part of me envies her but a much bigger part of me wouldn't want to live like that, the not seeing.  It's hard this looking within and it wears me down but I wouldn't give it up.