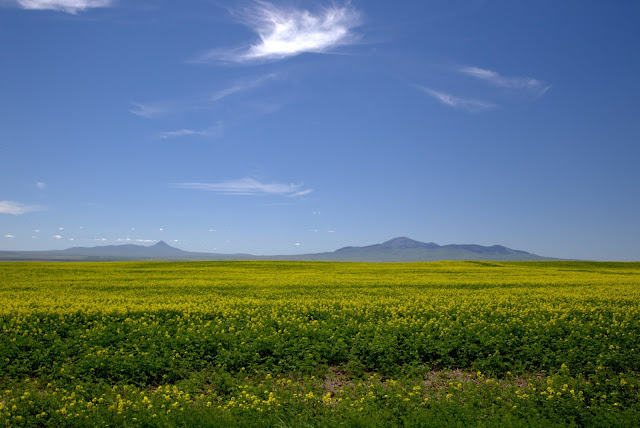 The Sweet Grass Hills of Montana in the distance. 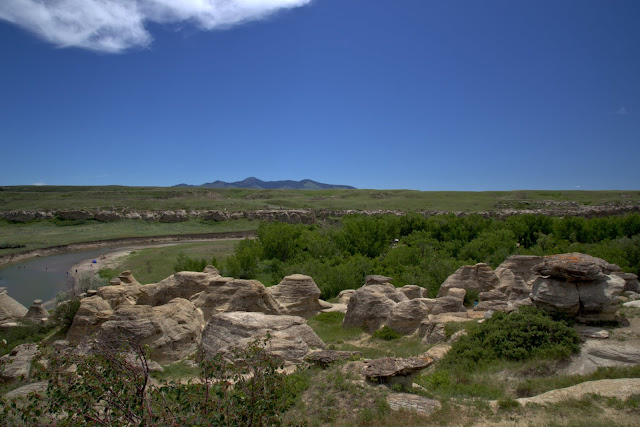 The Sweet Grass Hills of Montana in the distance and Writing on Stone Provincial Park in the foreground.  This area is a sacred place for the First Nations peoples of this area who have inhabited the area for around 9000 years.  From Wikipedia...

Other First Nations groups such as the Shoshone also travelled through the valley and may have also created some of the art. These carvings and paintings tell of the lives and journeys of those who created them, and of the spirits they found here. The towering cliffs and hoodoos had a powerful impact on the native visitors, who believed these were the homes of powerful spirits. The shelter of the coulees and the abundance of game and berries made the area that is now the park an excellent location for these nomadic people to stop on their seasonal migrations. While the greatest use of the area was made by those in transit, there is some evidence, including tipi rings and a medicine wheel, that there was some permanent settlement here.

The area was so beautiful and peaceful and awe inspiring.  The center of the photo is the Milk River Valley and the Milk River, where there are cottonwoods and camping and a beach.  Apparently the First Nations peoples appreciated the cottonwood trees.  They are hardy trees that survive in Alberta and are underappreciated I think.

Except for two rain storms the skies were sunny all day, we saw deer and antelope and never heard a discouraging word:)

It was a good break from the pandemic.  Back in the real world, two of my coworkers were losing it yesterday.  One nurse, the one who drives my crazy, was saying she was going to divorce her husband.  Apparently he has a runny nose, like he gets every year at this time because of allergies, and he decided to get a COVID test and now has to self isolate until he gets the results, and their son is getting married on Saturday.  She was beside herself and I suggested that instead if divorcing him, she just push him down the stairs.  She laughed and said they don't have enough stairs in their house.

The other coworker is an xray tech who is normally grumpy anyway but he was having a hissy fit over the regular shit at work.  Everyone is worn down, myself included.  The pandemic has added a thick layer of stress overtop all the other stresses that we deal with everyday anyway.

I had a lovely surprise last night as I lay in bed, a phone call from the other side of the world.  My girlfriend from Australia called me and we talked for almost an hour an a half.  We laughed, talked seriously, were silly, nostalgic and and then laughed some more.  It was a boon, for both of us I think.  We have known each other since we were teenagers.  She was the beautiful, sophisticated one and I was the weirdly, awkward girl.  Now we're both just in our fifties and still friends.

And today as I sit here I have the back door open, listening to the rain come down.  It hasn't stopped raining since we got home and the back yard is green and lush.  Our grandson is coming over in an hour and he'll spend the day and the night with us.  Gracie starts a job tomorrow so I'll take the little guy to daycare and pick him up.  In spite of everything, life goes on.