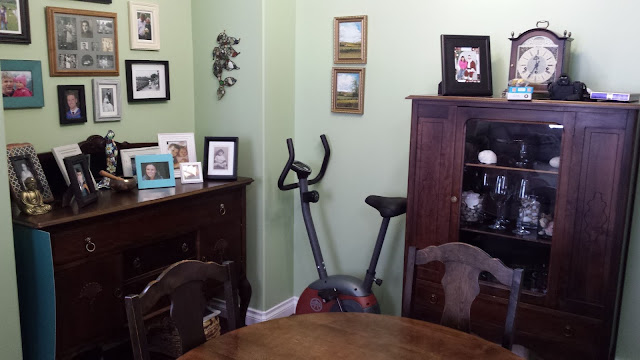 The newest addition to my dining room.  I'm not getting enough exercise.  I love walking outside but in the winter it's so slippery and to be honest falling scares the crap out of me now.  Last winter I decided I would swim, which I did, twice.  To be able to swim I need to drive the big guy to work so that I can then use the car to get to the pool.  I do love swimming but I do not like getting into a swim suit.  I also have very sore feet now which rules out a treadmill, so a bike it is.  I should add here that I don't like bike riding but at this point I don't like sore feet, I don't like putting on a swim suit and I don't like falling.

So now there is a very small exercise bike that sits in my dining room which I will use three times a week.  The big guy will hold me to this because he made a terrible face when I brought up the idea of an exercise bike.  Guilt will hopefully inspire me.

We went to visit my in-laws yesterday.  They had spent Christmas day with my step daughter, her boyfriend, their girls and my husband's ex-wife.  My husband's ex-wife always spends Christmas with her daughter so if my in-laws want to see her, they spend Christmas with the ex.  For the last twenty-two years.  And she doesn't cook, ever.  So my mother in law cooks for my husband's ex every Christmas, except finally this year my step daughter decided to cook, except for the turkey.  They asked my mother in law to cook and bring the turkey.

Whatever, it's weird.  My step daughter and her mother bought a house together so they can all live together.  My step daughter and her boyfriend lived in our house for two years.  They didn't pay any rent, only utilities.  They didn't pay the land taxes, event though they said they would.  They didn't do anything to make the house look better, even though they said they would.  They rarely cut the lawn; the neighbours cut the lawn.  They had to be harassed to shovel the snow and clear the walks.  They would borrow our lawn mower to cut the lawn and not return it.

They left in a huff because my step daughter said we didn't respect the father of her children.  The guy who is verbally abusive towards her and his two boys from a previous relationship.  The guy who is a pathological liar.  The guy who would rather buy guns than a bed for his own daughter.  The guy whose anger scares the shit out of me.

They managed to save some money which was the whole point of the exercise.  After their second daughter was born I felt more and more unwelcome in the house.  My step daughter told me that her grandmother was coming for a month when the second baby was born and basically, don't come around.  When I wanted to stop by to see my granddaughters I was told if her mother was there, so don't come which was never said out loud, only implied.  I didn't have a problem with her mother but I'm guessing looking back that her mother had a problem with me.

So now my husband's ex-wife, her husband, my step daughter, her boyfriend and their two girls are living in a house that we were able to help them save money towards and we are not allowed to see our granddaughters.

My father in law took Christmas photos so that we could see our granddaughters but I can't do it anymore.  It's breaking my heart all over again.  I miss those girls so much and my step daughter moving in with her mother pretty much put the nail in the coffin for us ever seeing our grandchildren again. 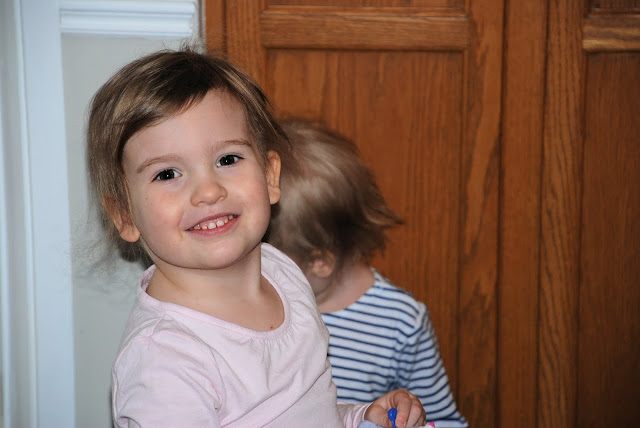 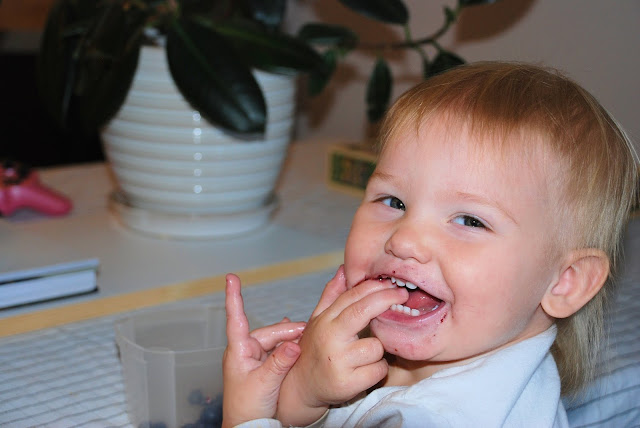