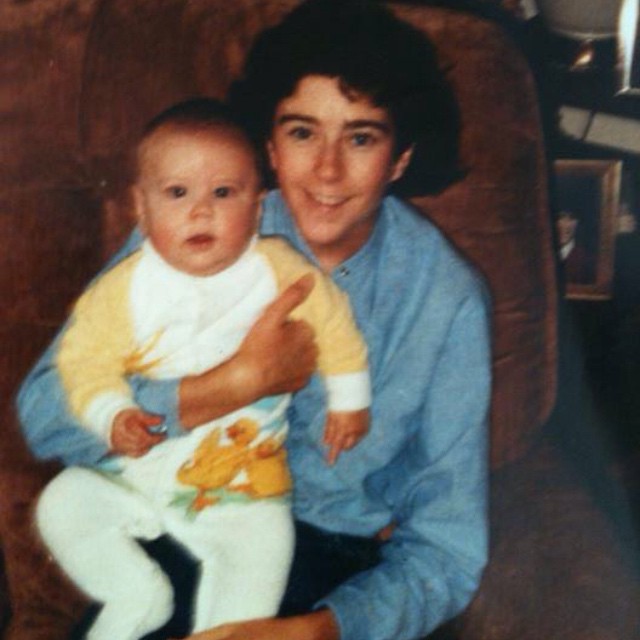 My beautiful son, thirty-four years ago.  I was far too young to be a mom but that's how things happened.  When he was two weeks old I applied for nursing school and was accepted.  I knew that his father would never be able to care for us;  I would need a good job to support us.  When he was ten months old I broke up with his father but never stopped either his father or his grandparents from seeing him.  He was always a part of their family too.  I still talk to his grandmother on a regular basis.

I left his father because of lies and alcohol.  I didn't want my son growing up with a father who lied about everything.  I thought I could protect my son.  Turns out I couldn't and it breaks my heart.

My son was in jail last summer for domestic violence.  He and his girlfriend were drunk and he hit her.  This happened twice, once in February and once in June.  Both times there was a no contact order and he violated those no contact orders four times.  He spent 100 days in jail and was released last September.  He is on probation for one year with the requirement that he not drink alcohol and not contact his ex girlfriend.  He did both.  He's still in contact with her, he still drinks himself into oblivion.

He has texted me twice in the last two weeks telling me he wants to die and is surprised he's still here.  He asks for money, begs for money.  He tells me he will end up on the street.  He's hungry.  He pulls every string he can think of to get what he wants which is just money.  More money to drink or buy drugs or fuck women.

And I tell him no.  What he doesn't understand, couldn't possibly understand is the price it costs me to say no to my son.  It's painful and always drags me under a little.  Eventually the drag that is only a little adds up and I'm drowning again.

The big guy says my son needs to hit rock bottom.  I know this.  I get it but it's awful to watch.  He is a part of my heart.  I don't even like him anymore but he still lives in my heart.  And oh my god it hurts.