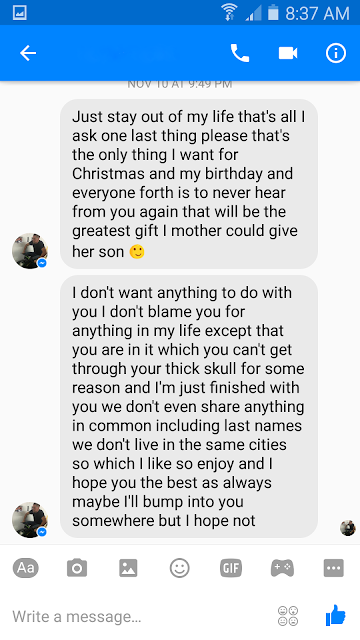 I got this message from my son just over a month ago.  He wanted me to lend him money and I said no.  And then I called him on his lies.  He didn't like that obviously.

He broke my heart, again.  He's broken my heart more times than I care to remember.  I love him but I don't trust him and I don't believe him.  I want to believe what he tells me because he's my son and I love him, but I also want to believe him because it's easier than seeing him for what he really is.  He's a manipulative, self centered, immature, angry, hurt man.

I was never a perfect mother.  I was a deeply depressed mother who chose to get angry instead of sad.  If I had been sad all his life, I would have lay in my bed all day long, crying.  Instead I got angry and stayed angry.  Angry is bigger and more energetic than sadness.  Anger made me get up out of bed and cook meals and do the laundry and drive my kids to school.  Anger made me prickly and unpredictable but it got the job done.

It wasn't until I was sweeping up the house that my kids grew up in, spitting angry at my soon to be ex-husband,  that I realized I wasn't really angry.  I was sad.  Sad that my family had been torn apart by me.  Sad that things would never be the same.  Sad that my ex-husband and I could not be what each other needed.  Sad that I had been angry for so long.

My son is thirty-two years old.  I need to stop feeling responsible for all of us flaws.  He's an adult.  His childhood wasn't perfect.  Neither was mine.  "Grow up already.  Quit blaming me for your problems.  They are of your own making."

My brain gets this.  My heart, not so much but it is getting better.   Christmas will suck and I feel terrible about that because I know I will be sad and I feel awful about that.  I've never really liked Christmas and this is pretty much the icing on the cake.

I love my son very much but I refuse to accept his lies anymore; he's hurt and angry with me as a result.  There is a line from a book I read not that long ago, "The Humans" by Matt Haig.  The line is "I hurt and so I hurt."  I try to remember that.